1. A decentralised system for sending money to other people

Most payment systems run on a centralised network. The problem with this is that you have to incur unnecessary and expensive transaction fees. Usually, this is done by a central server that keeps track of your balances i.e. your credit card and/or the banks. It can also take several days for one bank to talk to another bank and so sending money becomes both expensive and takes too long.

A programmer calling himself Satoshi Nakamoto successfully found a way to build a decentralised digital cash system, thus avoiding the need for a centralised system. He describes it in a surprisingly simple way in his White Paper for Bitcoin, which I have added in the Appendix. You should read it before buying Bitcoin. 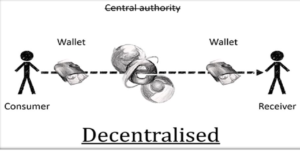 A decentralised system means the network is powered by its users without having any third party, central authority or middleman controlling it. Neither central banks or Governments has power over this system.