Cryptocurrencies are digital currencies which can be used to digitally transfer money to another person safely, without having to use intermediaries or trusted third parties, like a bank or Visa, e.g., to verify that you have sent the money and the money is now no longer yours. You might want to read that sentence again, slowly. In addition, it does it much faster at a fraction of the cost because it does away with unnecessary and expensive transaction fees.
Why ‘crypto’?
The way digital currencies provide safety is two-fold. The first is that it uses Encryption technology (hence the name cryptocurrency).
What is the blockchain?

The second way is to have a public ledger, where all the transactions are kept. Thousands of computers around the world are linked together to display this ledger. They refresh and update every few minutes. This network of computers all linked together in this way is called the blockchain. You can trust it because it means that each transaction has been verified again and again by all the computers (the blockchain). With thousands of computers linked up all over the world saying the same thing, the ledger’s integrity is upheld. Each cryptocurrency can have its own blockchain, although some are shared.
How does this work?
Imagine I send you 10 dollars and you send the 10 dollars to someone else. Somehow someone has to keep track of these transactions, to avoid forgeries or anyone claiming they haven’t received the money. In the past, Central Banks or banks have kept details of the transaction on something called a ledger. This is based on a centralised system. With Bitcoin, currently the main digital currency, the whole system was turned on its head. Instead of a centralised system controlling the ledger, now thousands of computers, all around the world, each keep a copy of this Ledger. Every single transaction is kept there, from the beginning to present day. This is a decentralised system, called the ‘blockchain’.
Please note that money in itself does not have any intrinsic value – it is only because we believe that it has value that it is worth anything. Money is just a tracking system – we track what we own and what we owe. This is called a ledger. Whatever form of money exists, we give it value because of its utility as a ledger (or tracking system of who owes what). That’s what the blockchain is – a giant decentralised ledger.
Why are so many computers necessary?

The idea comes from airplane safety. If you have one computer flying the plane and the system crashes, the airplane could crash. The thought was that if there were three computers, and one crashed, then the fact that two computers were saying something different to one meant that the two outweighed the one and the plane would continue even if one crashed. The inventors of the blockchain took it one step further and wanted as many computers as possible to be in on it. So if there is a disagreement on a few computers of the blockchain, whatever the majority e.g. 51% are saying will win and that information is put on the ledger on all the computers.
A particularly brilliant analogy for this comes from Nick Szabo, the inventor of Bitgold, which many view as the precursor of Bitcoin. Imagine a fly trapped in amber. If there is only a small layer of amber, we know that the fly has not been trapped for very long. But if there is a big block of amber, we know that the fly has been trapped for a long time – no one can dispute that. 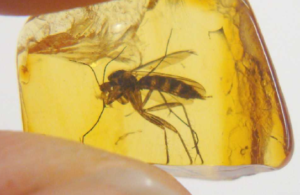 In other words, millions of small transactions, i.e. me sending you some money in another country, are documented on the blockchain, locking them in for good, so that they can’t be changed afterwards. The information (or fly) is trapped as irrefutable evidence and the transaction can’t be undone. That’s the whole point of the decentralised system – the computers allow it to remain decentralised and in the hands of many as opposed to the hands of a few who are trying to control the many.
What are miners?
There are two ways of getting Bitcoin. You can either buy one at the current price (today’s price is $4,200 for one Bitcoin) or you can ‘mine’ it. The analogy is like mining for Gold. However, with digital currencies it is slightly different, as you don’t have to go down a mine to do so. With cryptocurrencies, you have to do it through something called, ‘Proof of Work’. Proof of Work refers to the fact that if you want a Bitcoin, you have to literally prove that you have done work and in return you get paid in Bitcoin tokens.
In cryptocurrencies this is done by creating a scenario where if you want to get paid in Bitcoins, you have to do something which is not easy to do i.e. you have to commit your computers to solving puzzles or mathematical functions. If the computer solves the puzzle then it proves that you have dedicated power, time, effort, heat and computation to solve the problem. The more you do this the more of a ‘vote’ you are allowed to have. This vote is embodied in a Bitcoin token. You receive a token of Bitcoin (a fraction of a Bitcoin) in return for mining it.
Only miners are able to confirm a transaction. This is their role in the cryptocurrency network. They record transactions, verify them and disperse the transactional information in the network.
For every completed transaction monitored and facilitated by the miners, they are rewarded with a token of cryptocurrency, for instance with Bitcoins.

What this does is introduce scarcity into the system. Scarcity is important because the only way anything has any value is because it is scarce. If Gold, like pebbles, were to be found everywhere, it wouldn’t have any value. But Bitcoins are not easy to mine – it takes computational power and time to do it AND there are a maximum of 21 million that can ever be mined. This creates instant scarcity.
Terms
An Altcoin (Alternative coins) is the name given to coins which were set up to compete with Bitcoin, like Dash, Litecoin and even Dogecoin. The term ‘crypto’, short for cryptocurrency, is used for all coins.
A digital currency is a virtual currency. It is unregulated, issued and usually controlled by its developers, and used and accepted among the members of a specific virtual community. It is a medium of exchange that operates like a currency in that specific environment but not necessarily outside of it.
A cryptocurrency is a currency based on certain principles of cryptography. It is a type of digital token that relies on these principles to chain together digital signatures of token transfers. It is based on a peer-to-peer network and it is decentralised.
In most situations, cryptocurrency is also a digital currency, though, in even more cases, digital currency is not a cryptocurrency.
Summary:
Bitcoin is a software program that allows people to securely transfer money over the internet without a bank.
It does this by replacing the function of a bank with a network of computers running the software that verifies and transfers the money.
These computers, known as miners, maintain a global ledger of transactions that is used to validate, verify and transfer money.

1. A decentralised system for sending money to other people

What are the benefits of Cryptos and what problem do they solve?