While the theory sounds good, Bitcoin in practice is not as decentralised
as people might have you believe. By some metrics it is not performing as
well as some proponents might lead you to believe.
Bookkeeping Nodes
While there are around 10,000 nodes who perform bookkeeping tasks
and who relay transactions and blocks, they are mostly running the same
software written, and therefore controlled, by a very small number of
people. They are known as the ‘Bitcoin Core’ developers and the software
is known as ‘Bitcoin Core’. 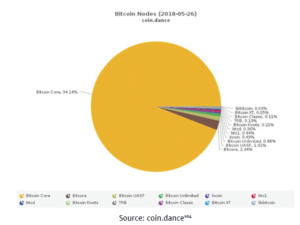 The various versions, or implementations, that are not Bitcoin Core all
have slightly different rules but are not different enough to create
incompatibilities. Some, for example, may have additional flags to signal
that the bookkeepers would be prepared to adopt a rule change if enough
participants also signal the same intention.
Mining
Although anyone can mine, the process has become so intensive that new
hardware and chips are created which are designed to be exceedingly
efficient at performing the SHA-256 hashing. ASICs (Application Specific
Integrated Chips) became the norm for mining in 2014 and outcompete
all other forms of hardware in terms of energy efficiency for Bitcoin
mining. Dave Hudson explores the effects of ASICs in his excellent blog
Hashing It105. In the popular media, the computational power of these
specially designed chips is often compared to the computational power of
supercomputers, but ACICs cannot operate as general-purpose
computers, so comparisons with supercomputers are meaningless. Only a
few entities can mine profitably, usually using special purpose ‘mining
farms’ clustered in areas of cheap electricity. The chart below shows
miners and what proportion of blocks they have recently mined. The
proportion of blocks they have mined is roughly equivalent to their
hashing power as a proportion of the total hashing power of the network. 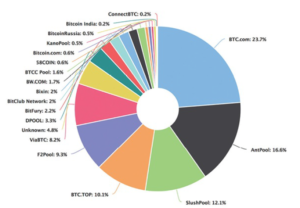 Bitcoin mining is not that decentralised! Source: blockchain.info106

Some of these are single mining entities. Others are syndicates that
anyone can join, contribute hash power, and receive rewards in
proportion to their contributions. At an estimate, around 80% of the hash
power is controlled by Chinese entities. BTC.com, Antpool, BTC.TOP,
F2Pool, viaBTC are all Chinese groups107, and a company called Bitmain
owns both BTC.com and Antpool. Hence, if only the top three mining
pools collaborate, they can reorganise blocks and arrange double spends,
and no one would be able to stop them as they represent more than 50%
of the total hashing power. So this is not a well-decentralised system.
It is often argued that miners wouldn’t do this because it would cause a
loss of confidence in Bitcoin and thus cause the price to fall, and their
stock of bitcoins would be worth less. However, an enterprising group of
miners who carried this out could build a temporary large short trading
position just before executing a double spend and profit on the fall in
price of BTC.
Mining Hardware
As discussed, miners use special purpose chips called ASICS that are
specifically designed and built to be efficient at SHA256 hashing.
Commercial chip manufacturers have been slow to design chips that are
specifically built to be efficient at SHA256 hashing, so demand has
created an alternative specialised industry for supplying Bitcoin ASICs.
The main provider of this is Bitmain, the same Chinese company who
controls the top two mining pools. It has been estimated that Bitmain
produces hardware that mines 70-80% of the total blocks in Bitcoin108.
Bitcoin hardware manufacturing is not well decentralised.
BTC ownership
The ownership of BTC too shows a concentration in a small number of
hands:

According to this analysis, almost 90% of value is owned by fewer than
0.7% of the addresses. Of course, we have to treat this kind of analysis
with some caution. Some large wallets are controlled by exchanges who
take custody of coins on behalf of a large number of users. So the table
might be overstating the centralisation of Bitcoin ownership. Against
that, some people might spread out their bitcoins across a large number
of wallets in order to not attract attention. This is very easy to do. So the
table might be understating the centralisation of Bitcoin ownership.
However, it remains highly likely that, just as in the non-crypto world,
very few people probably own the vast proportion of the value. Now,
there’s a surprise.
Upgrades to the Bitcoin Protocol
Upgrades to the Bitcoin network and protocols are also fairly centralised.
Changes are suggested in ‘Bitcoin Improvement Proposals’ (BIPs). These
are documents that anyone may write but, but they all end up on a single
website: https://github.com/bitcoin/bips. If it gets written into the
Bitcoin Core software on Github, https://github.com/bitcoin/Bitcoin, it
forms part of an upgrade, the next version of ‘Bitcoin Core’ which is the
most commonly used software, or ‘reference implementation,’ of the
protocol. As we have seen, this is run by the vast majority of participants.
Transaction Fees 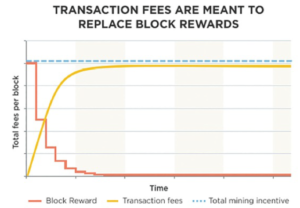 In theory, the transaction fees collected per block is meant to compensate
for the decrease in block reward as the network gets more popular over
time. The reality is that this doesn’t seem to be working out. 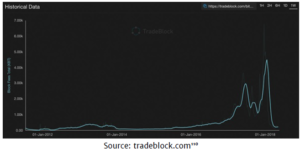 The chart shows that except for a brief spike at the end of 2017, the total
transaction fees have stayed stubbornly low at approximately 200 BTC
per week. Compare this with the new 12,600 BTC generated from
coinbase rewards per week (12.5 BTC per block x 6 blocks/hour x 24
hours/day x 7 days/week = 12,600 BTC, a figure which reduced by half in
2016, and is estimated to half again in 2020). Without significant
increase in transaction fees to compensate, clearly the economics of
Bitcoin mining will change.