Like gold or oil or any other asset, bitcoins have a value that can be priced
in USD or any other currency. This means there are people who are
willing to exchange BTC with USD, usually using cryptocurrency
exchanges, marketplaces which attract buyers and sellers. On exchanges
you can see indications of supply and demand for cryptocurrencies at any
price level (more on these later). You can also buy and sell bitcoins with
anyone in the world, physically on the streets or over the internet, or
using brokers who mediate between buyers and sellers, or who trade on
their own behalf. To trade BTC, you simply need the ability to send or
receive BTC and the ability to receive or send the other asset, usually a
local currency.
Like any other market-traded asset, the price of Bitcoin fluctuates with
supply and demand. At any point in time, people trade at prices that they
are comfortable buying or selling at. If there is more buying pressure and
people want to buy more bitcoins, prices will increase. If there is selling
pressure and people want to sell more bitcoins for fiat currencies, then
the price at which the bitcoins change hands will drop. Later we will go
into more detail about how cryptocurrencies and tokens can be priced,
but here we will look at specifically Bitcoin’s price.
Bitcoin’s Price History
Bitcoin’s price has been a wild ride. A recent price rise to almost $20,000
USD per Bitcoin and subsequent fall the $6,000 levels has caught the
media’s attention: 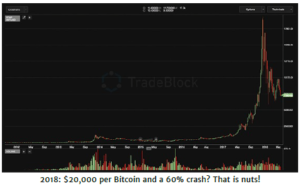 But this is not the first time Bitcoin has been this volatile. Bitcoin appears
to be cyclically volatile, with each cycle as dizzy as the previous.
Here is the 2013/14 bubble in detail: 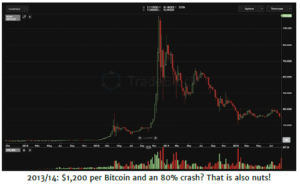 The peak price on Mt Gox was almost $1,200 per Bitcoin, and then
crashed to below $200, rebounded and then traded lower and lower over
crashed to below $200, rebounded and then traded lower and lower over
to the $200-300 range during the ‘Bitcoin winter’ of 2014. These were
painful times for holders of Bitcoin, if good times for far-sighted buyers.
There are different theories for the cause of this bubble including the
activities of trading bots—programs that automatically buy and sell—and
the fact that you couldn’t withdraw fiat from Mt Gox. Anyone wanting to
withdraw value from Mt Gox had to buy bitcoins (pushing the price up)
and withdraw bitcoins. The Chinese government then announced that
they were going to ban Bitcoin trading and the price crashed.
But this was by no means the first bubble. Here is early 2013, close up,
when in April the price rose from $15 to a peak of $266 before crashing to
around $50: 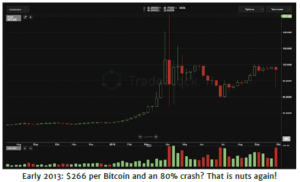 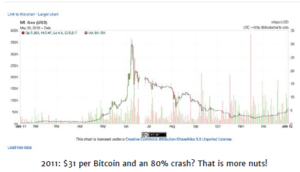 Articles published in tech-focused online magazines WIRED and Gawker
helped to generate interest in Bitcoin, pushing the price from about $3 to
a high of about $31. Over the next 6 months the price slowly fell to below
$5, more than 80% down.
And here is the first bubble in July 2010: 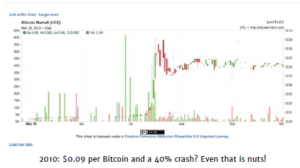 An article about a new version of the Bitcoin software was published in a
popular technical magazine Slashdot140 and interest was generated,
pushing the price on the Bitcoin Market up from less than 1 cent per
Bitcoin to almost 10 cents. The price then fell 40% and traded sideways at
about 6 cents per Bitcoin for a few months before increasing again.