Many experiments using blockchain technology have been announced by
startups and incumbents alike. Thy are often described as ‘use-cases,’ a
term that implies, optimistically, that a blockchain would be a good use
for the particular problem described. This selection of experiments
collated by Peter Bergstrom217 gives a flavour of the scope of interest in
blockchain use: 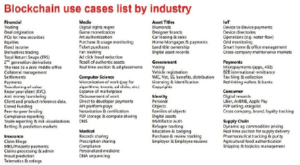 And here is a beautiful infographic from Matteo Gianpietro Zago218: 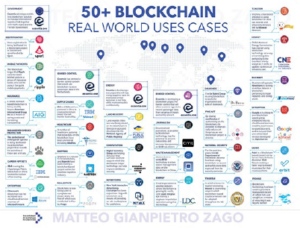 I include these lists as examples of the sharable but ultimately misleading
hype that is propagated in the mainstream and social media. These are
not actual use cases. They are experiments to apply blockchain
technology to a variety of industries and business workflows,
appropriately or not. 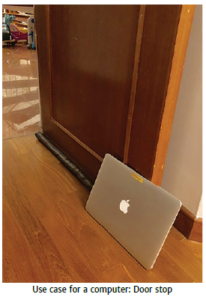 Just as you could draft a letter using spreadsheet software, you can use a
blockchain in almost any business situation that involves data. After all, a
blockchain is a database with some additional features. In my view, many
of these experiments will not deliver the promised benefits because more
appropriate software and tools are available. However, some may succeed
or evolve and get traction.
It is still unclear which processes will be significantly improved as a direct
consequence of the technology, and which are improved simply by
digitising the workflows.
Does it matter? In many cases a project might not need a blockchain, but
using one might trigger interest and management enthusiasm, and even
unlock a budget which might not have been available if the project was
just a boring old digitisation project. This is fine, and in this case, I think
the ends justify the means. Without some amount of hype to spark the
imagination there would be less money to spend on innovating, and
therefore potentially less innovation.

Questions to Ask
With so many attempts to use blockchain technology, how do you attempt
to understand the use and value of blockchain technology in these
experiments?
There are certain questions that can be useful to ask. Earlier we asked,
‘Which blockchain?’ and, ‘The public one or a private one?’ From there,
the questions depend on the answers to the original questions. Here are a
few to get started.
For public blockchains, it is useful to understand:
• Will all parties run nodes or will some trust others?
• If the blockchain is backlogged, what impact might have this have on
users?
• How will the project deal with forks and chainsplits?
• How will data privacy be achieved?
• How will operators comply with evolving regulations?
For private blockchains, it is useful to understand:
• Who will run the nodes? Why?
• Who is going to write blocks?
• Who is going to validate blocks and why?
• If this is about data sharing, why can’t a web server be used?
• Is there a natural central authority whom everyone trusts, and if so
why aren’t they hosting a portal?
For any type of blockchain:
• What data is represented on the blockchain and what data is ‘offchain?’
• What do the tokens represent?
• When a token is passed from one party to another what does this
mean in real life?
• What happens if a private key is lost or copied? Is this acceptable?
• Are all parties comfortable with the data that is being passed around
the network?
• How will upgrades be managed?
• What’s in the blocks?!219
Depending on the project, some of these questions may be more relevant
than others. Some of the solutions may come from network-wide
innovations. For example, public chains can currently become congested
but innovations such as payment channels may enable much higher
throughput. There are many more questions to ask, depending on the
project.
The point is that you should not take the breathless media
announcements at face value, but take a more investigative approach to
uncover if there is value in these experiments or not. At this stage of the
innovation cycle, an honest ‘I don’t know’ is an acceptable answer for
some of these questions, and it is more important to understand the
trade-offs than to immediately pass judgment on the solutions.