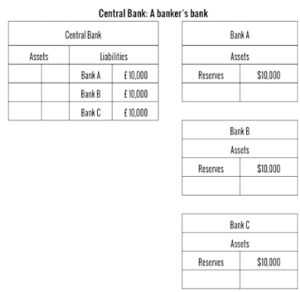 Each bank holds an account with the central bank.
Banks can have multiple accounts with central banks each for different
purposes, in the same way that you can have multiple savings pots—a
deposit for the home you hope to buy, a holiday, a new car, a wedding,
provision for a rainy day, etc. Here, we care about the accounts that are
used for interbank payments.
We call the systems that manage these records interbank settlement
systems. There are broadly two types:
• Deferred Net Settlement (DNS) systems
• Real Time Gross Settlement (RTGS) systems
DNS Systems
DNS systems are systems that queue up payments due between banks
then make a single payment at the end of a given period of time, for
example at the end of every day. Payments in both directions are ‘netted
off,’ and one single payment of the outstanding balance, in whichever
direction it is due, is made at the end of the period. For example,
throughout the day Bank A will accumulate payments to make to Bank B,
and Bank B will accumulate payments to Bank A. At the end of each day,
these payments will be added up against each other and only one single
payment will be made representing the net total owed, either by Bank A
to Bank B or by Bank B to Bank A, depending on the day’s transactions.
DNS systems are capital efficient. Banks need to set aside only the
forecast net amount of outflow in a given period, taking into account the
expected inflow. You do the same when you set aside money for next
month’s expenses but ‘net off’ your expected income (e.g., your salary) in
that period.
But there is a credit risk that builds up during each period, which
describes the risk that the forecast inflow doesn’t come in or, in the worst
case, a bank becomes bankrupt mid-period. This risk can have a systemic
impact, as one failed obligation can impact the recipient’s ability to make
their payments. There needs to be a mechanism to ensure least
disruption to the remaining participants.
RTGS Systems
With RTGS systems the -10/+10 adjustments on the central bank’s books
are made in ‘real time’ during the day as soon as a payment instruction is
made by a customer. Each payment instruction is settled independently
and not grouped, batched, or netted off against any other instructions.
This is known as ‘gross settlement,’ the opposite of ‘net settlement’.
DNS systems used to be popular, but nowadays most central banks also
operate some kind of RTGS system to settle immediate payment
instructions, and customers increasingly expect payments to be made in
real time. These RTGS systems operate at least during office hours, and
many systems now operate 24×7, at least for small transactions. The
trade-off is that banks need to set aside more capital to make sure all
payments can be made immediately.
So, back to the example. How does Alice pay Bob if both of their banks
are on a RTGS system?
As both Bank A and Bank B are on the central bank’s RTGS system, the
central bank performs the -$10/+$10 to remove money from Bank A’s
account and add it to Bank B’s account. This is the settlement between
the two banks, and in industry terminology, it is said that the central
bank ‘clears’ the transaction. The account which each bank holds with the
central bank for this purpose is sometimes called their clearing account. 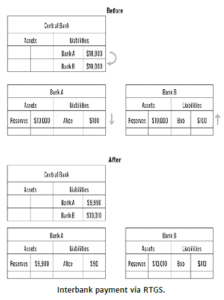 So to recap, and remember, here we are dealing with a single currency
only:
• If both customers bank with the same bank, then that bank itself
clears the transaction.
• If two banks have a ‘correspondent banking’ relationship, then the
receiving bank clears the transaction.
• If there is a central bank system—a RTGS or DNS—then the central
bank clears the transaction.
Clearing
Unfortunately, the word clearing is used to mean different things in
different contexts. As we have just seen, clearing in payments refers to
the final -$10/+$10 transaction. It is not to be confused with clearing in
securities trading, which means something else.
In securities trading (for example, shares), two parties strike a deal, say
on a stock exchange: one buys from or sells to the other in return for
electronic cash. But they do not exchange the cash and shares directly
with each other: they settle against a central clearing party instead. So
once a trade between parties A and B is agreed, A and B actually both
settle up with C, the central clearing party.
C, the central clearing counterparty (CCP), acts as the legal trading
counterparty to each side. So where, for example, A buys shares from B, A
sends the cash or funds to C56, and B sends the shares to C57. Once C has
received the right amount of funds and shares from the respective sides,
it then reassigns the funds and the shares respectively, i.e., it gives the
shares to A and the funds to B. This setup removes the credit risk
between A and B: A and B no longer have credit risk with each other;
instead, they both have credit risk with C, whom they both trust for this
purpose, at least more than they trust each other.
Clearing Banks
Back to payments, in some countries only certain banks get to have
accounts with the central bank. These are called ‘clearing banks,’ because
they can clear payments, as we have seen above, through the central
bank. Smaller banks, or foreign banks with a local presence who are not
able to access the central bank, need to open accounts with a clearing
bank instead. The clearing banks get to make fees from their privileged
position.
Thus, you get a pyramid, a hierarchy of relationships, with the central
bank sitting at the top, the clearing banks sitting a layer below, and finally
smaller banks, or non-clearers, who don’t have an account at the central
bank. They use a clearing bank to make payments in the same way a
clearing bank uses a central bank, knowing that the clearing bank can call
upon the central bank to clear its own payments when it needs to. 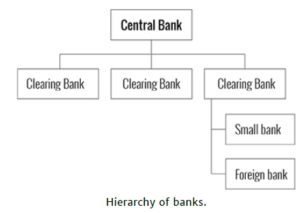 Different jurisdictions operate differently. The UK’s RTGS system, for
example, known as CHAPS, is highly tiered. Only a small number of
banks have accounts at the UK’s central bank, the Bank of England;
whereas in Hong Kong all licensed banks operating in the jurisdiction are
required to have an account at its central bank, the Hong Kong Monetary
Authority.
Although a central set of books run by a central bank is much more
efficient than each bank maintaining lots of accounts (or ‘nostros’) with
every other bank, the system works only within one jurisdiction and in
one currency. So while most economically developed jurisdictions will
have a centrally cleared RTGS or DNS system for clearing interbank
payments within that country for their respective domestic currency,
there is no ‘central bank’ of the world, not even the World Bank,
however grand and ambitious its name.