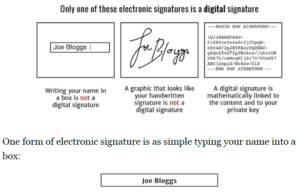 This is also an electronic signature, but not a digital signature.

So what does a digital signature look like? I created a small message
containing the text ‘Here is a message I want to sign’. and I signed it
using the (private) PGP key I generated earlier. Here is what the
signature looks like:

So that is a digital signature. Looks like gibberish. So what’s so special
about it? What does it prove?
A digital signature is created by taking the message you want to sign and
applying a mathematical formula with your private key. Anyone who
knows your public key can mathematically verify that this signature was
indeed created by the holder of the associated private key (but without
knowing the private key itself).
So, anyone can independently validate that this piece of data was signed
by the private key holder of this public key.
In essence:

In contrast, a digital signature is only valid for that exact piece of data,
and so it cannot be copied and pasted underneath another piece of data,
nor can someone else re-use it for their own purposes. Any tampering
with the message will result in the signature being invalidated. The digital
signature is a one-time ‘proof’ that the person with the private key really
did approve that exact message. No one else in the world can create that
digital signature except you, unless they have your private key.
Now, just to explain one further step, the mathematical process of
‘signing’ a message with a private key is actually an encryption process.
Remember that you encrypt data with a public key, and decrypt it with a
private key? With some schemes you can also do it the other way around:
you can encrypt data with a private key and decrypt it with a public key.
So actually the validation process is taking the digital signature and
decrypting it with the well-known public key, and seeing that the
decrypted signature matches the message being signed.
But what if the message being signed is really big, like, say, gigabytes of
data? Well, you don’t want a really long digital signature, as that would be
inefficient. So in most signing schemes, it is actually the hash
(fingerprint) of the message that is signed with the private key to produce
a digital signature which is small, irrespective of the size of the data being
signed.
There is a good summary on Microsoft’s Technet website: 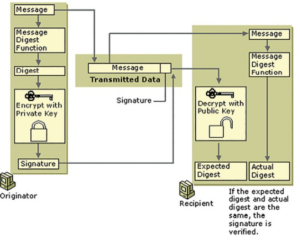 So digital signatures can be used to authenticate a transaction or
message, as well as to ensure data integrity of the message. Also, unless a
private key has been copied, it is impossible afterwards to say ‘it wasn’t
me’—this property is called ‘non-repudiation’ and provides comfort for
both parties to a transaction.
Digital signatures are used in blockchain transactions because they prove
account ownership, and the validity of a digital signature can be proven
mathematically and offline, without asking any other party. Compare this
to traditional banking: when you instruct your bank to make a payment,
you first authenticate yourself by logging in to the bank’s website, or
showing your ID to a bank teller in person. If the bank believes that you
are the account holder, then the bank executes your instruction on your
behalf. In a blockchain system, where there is deliberately no
organisation to provide or maintain accounts for you, your digital
signatures are the critical piece of evidence that entitle you to make
signatures are the critical piece of evidence that entitle you to make
transactions.

WHY ALICE AND BOB?