Ethereum is a highly successful public blockchain by adoption,
mindshare, and the number of developers working on Ethereum smart
contracts and decentralised apps. Below is a short history of Ethereum,
and some difficult periods in its history that it has managed to overcome.
2013
Vitalik Buterin described Ethereum as a concept in a white paper in late
2013. This concept was developed by Dr Gavin Wood who published a
technical yellow paper in April 2014. Since then, the development of
Ethereum’s software has been managed by a community of developers.
A crowdsale took place in July and August 2014 to fund development,
and Ethereum’s live blockchain was launched on 30 July 2015. You can
see the very first block here: https://etherscan.io/block/0
Ethereum crowdsale
The development team was funded by an online sale of ETH tokens
during July to August 2014 where people could buy ETH tokens by
paying in Bitcoin. Early investors received 2,000 ETH per BTC, and this
was gradually reduced to 1,337 ETH179 per BTC over the course of about a
month, to encourage investors to invest early.
Crowdsale participants sent bitcoins to a Bitcoin address and received an
Ethereum wallet containing the number of ETH bought. Technical details
are on Ethereum’s blog180.
A little over 60m ETH was sold this way for more than 31,500 BTC, worth
about US$18m at the time. An additional 20% (12m ETH) were created to
fund development and the Ethereum Foundation.
Software Release codenames
Frontier, Homestead, Metropolis, and Serenity are friendly names for
versions of the core Ethereum software, a little like Apple’s OS X version
names such as Mavericks, El Capitan, Sierra. 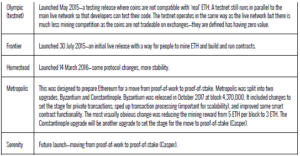 Actors in the Ethereum Ecosystem