Some people talk about The Gold Standard. In fact, there is no such thing
as the gold standard. There are a few types of gold standard:
1. Gold specie standard. Coins are made of gold and are a certain
weight and purity in convenient standard units instead of random
shapes, sizes, and weights. This is called a gold specie standard.
Specie is a Latin word for ‘the actual form’. This is commodity
money.
2. Gold bullion standard. Notes (bits of paper) are redeemable or
convertible at the issuer (usually the central bank) for gold—usually
in the form of gold bullion (this means bars of gold of certain
standard weights and purities). This is called a gold bullion
standard. This is representative money.
3. Non-convertible gold bullion standard. This is where the
issuer declares that their currency is worth a certain amount of gold,
but doesn’t allow you to redeem your money for gold. This is starting
to blur the lines between representative and fiat money.
When people talk about the gold standard, they usually mean a gold
bullion standard where a note represents some defined amount of gold
and can be redeemed for it. The issuer of the currency, usually a central
bank, pegs their currency to a fixed weight in pure or fine gold and tells
the world that they will exchange one unit of currency for a certain
amount of gold stored in their vaults. This is a currency peg, which we
discussed earlier, and means they need to have the gold in their vaults in
order to remain credible and promise to let people redeem their notes for
gold. The amount of gold you have in your vaults is largely irrelevant if
you don’t let people redeem their notes.
When a few countries adopt a gold standard, the exchange rates between
their respective currencies become effectively pegged. In theory, you can
always sell one currency for gold, and then buy a known amount of
another ‘gold standard’ currency with it. So the gold peg rates also
determine the currency-to-currency exchange rates. Before the First
World War, the effective exchange rate between the US dollar and the
pound sterling was $4.8665 to £1 because both currencies were on a gold
standard. Of course, there are costs and risks involved in the transactions
and the storage and transport of the gold, so that is why it is an effective
peg with some wiggle room, rather than an absolute peg.
Before we look at an example of a gold standard, let’s clear up some
terminology. Gold and silver are measured by weight (or mass, to be
pedantic). The units are grains and troy ounces. There are 480 grains to
one troy ounce, and twelve troy ounces to one troy pound. In standard
terms, this means one troy ounce is 31.10 grams, which is about 10%
heavier than one ‘normal’ (or avoirdupois) ounce of 28.35 grams. Old
habits die hard—the troy ounce is still the measure used today when
pricing gold and other precious metals. 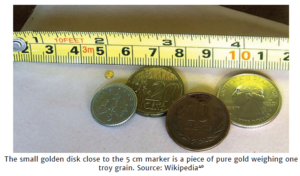 Gold Standards in the USA
Although many countries have attempted to peg their currencies to gold,
the USA has had an interesting history. According to Brief History of the
Gold Standard in the United States41 published by the Congressional
Research Service, the USA went through a number of periods with
multiple attempts at pegging the US dollar to gold. They all eventually
failed. Let’s look at what happened.
1792–1834—Bimetallic specie standard: Standardised gold coins
($10 eagles, and $2.50 quarter-eagles) and silver coins existed, minted by
the government. The definition of one dollar was based on a certain
weight of silver or a certain weight of gold which valued the metals in the
ratio 15:1. World markets valued gold a little more than implied by the
USA’s peg, so gold coins left the USA, leaving the USA mainly using silver
coins.
1834–1862—Silver flees the USA: The USA changed their ratio to
16:1 by minting the gold coins with slightly less gold. World markets now
silver a little more than implied by this new ratio. Thus, the silver coins
left the USA, leaving the USA mainly using the new, less-goldy gold coins.
It is hard to peg things that trade in markets abroad!
1862—Civil War chaos and fiat paper money: The USA
government issued notes called ‘greenbacks’. Greenbacks were notes that
were declared as legal tender, but were not convertible into gold or silver.
This took the USA off any metallic standard and onto fiat paper money.
The dollar lost value in the marketplace, and people preferred to hold
23.22 grains of gold more than one dollar.
1879–1933—A true gold standard: A dollar was re-defined in terms
of the pre-war weight of gold (but not silver) at $20.67 per troy ounce.
The treasury issued gold coins and convertible (redeemable) gold notes,
and greenbacks were once again redeemable in gold. The Federal Reserve
System was created in 1913.
Allow me to digress just for a bit of fun. This was a difficult political
period that coincided with the birth of populism in the US. Indeed, L.
Frank Baum’s book The Wonderful Wizard of Oz is regarded by some as
a clever political satire, a parable on populism, and a commentary on
monetary policy. References are numerous. Yellow brick road? Gold.
Ruby slippers? In the book, they were silver, and a reference to a populist
demand for ‘free and unlimited coinage of silver and gold’ at the 16:1
ratio. Scarecrow? Farmers who weren’t as dim as first thought. Tin Man?
Industrial workers. Flying monkeys? Plains Indians. The Cowardly Lion?
William Jennings Bryan, Nebraska representative in Congress and later
the democratic presidential candidate. Emerald City, where the Wizard
lives? Washington DC. The Wizard, an old man whose power is achieved
through acts of deception? Well, pick any politician in Washington. Now
can you guess what ‘Oz’ is a reference to? Yes, the unit for precious
metals. These parallels are discussed in more detail by Quentin P. Taylor,
Professor of History, Rogers State College in a fascinating essay “Money
and Politics in the Land of Oz.”42
1934–1973: The New Deal and the end of the true gold
standard. The 1934 Gold Reserve Act devalued the dollar from $20.67
to $35 per troy ounce, and ended convertibility for citizens. ‘The free
circulation of gold coins is unnecessary,’ President Franklin Roosevelt
told Congress, insisting that the transfer of gold ‘is essential only for the
payment of international trade balances’. The Gold Reserve Act outlawed
most private possession of gold, forcing individuals to sell it to the
treasury. Those found hoarding gold in coin or bullion could be punished
by a fine of up to $10,000 and/or jail time. According to Wikipedia43:
A year earlier, in 1933, Executive Order 6102 had made it a criminal offense for U.S. citizens to
own or trade gold anywhere in the world, with exceptions for some jewellery and collector’s
coins. These prohibitions were relaxed starting in 1964—gold certificates were again allowed
for private investors on April 24, 1964, although the obligation to pay the certificate holder
on demand in gold specie would not be honored. By 1975 Americans could again freely own
and trade gold.
This quasi-gold standard was maintained under the Bretton Woods
international monetary agreement of 1944. The Bretton Woods
agreement is explained in greater detail later.
1971: The Nixon administration stopped freely converting dollars at their
official exchange rate of $35 per troy ounce. This effectively ended the
Bretton Woods agreement.
1972: The dollar was devalued from $35 to $38 per troy ounce.
1973: The dollar was devalued from $38 to $42.22 per troy ounce.
1974: President Gerald Ford permitted private gold ownership again in
the USA.
1976: The gold standard was abandoned in the USA: The US dollar
became pure fiat money.
So people talk about the gold standard, but let’s be realistic: It is not
really a gold standard if (a) people can’t redeem their dollars for gold, and
(b) you keep changing the rate. It turns out that implementing a gold
standard is difficult, even if you can put people in prison for owning gold!

Money Through the Ages