Sometimes Bitcoin wallets can have a hardware component. Private keys
are stored in chips on small handheld devices. Two popular hardware
wallets are called ‘Trezor’ and ‘Ledger Nano,’ but there are others. 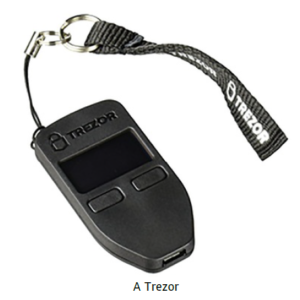 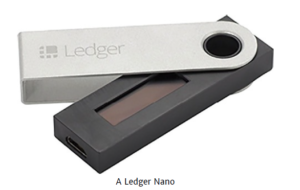 There are many ways of storing them. You can memorise keys if you have
a good memory, you can print them out on bits of paper, you can even
engrave them on a ring that you wear, like Charlie Shrem did according to
WIRED Magazine146. You could store them on an offline computer which,
for increased security, should not have a modem or network card. You
could write them down and put them in a bank’s locked deposit box.
These are all methods of storing your private keys offline.
If you do keep private keys on a device or printed out, you wouldn’t want
someone else to be able to see it and use it to steal your bitcoins. So one
way of increasing security is to first encrypt the private key with a
passphrase that you can remember and then store or print out the
encrypted result. Passphrases are a lot easier to remember than private
keys! This means that even if someone gets hold of the device or print
out, they’d need to decrypt it with your passphrase before the private key
is revealed. You can split keys or use multi-sig addresses for further
security. This means if one part is found by a thief, it is useless without
another part, and also means if one part is lost, the other two will still
work. Remember, you are trying to simultaneously guard against two
things: Loss of keys and theft of keys.
Hot Wallets
A hot wallet is a wallet that can sign and broadcast transactions without
manual intervention. Exchanges, who control many bitcoins need to
manual intervention. Exchanges, who control many bitcoins need to
manage lots of Bitcoin payments, as we will see later. They often have a
‘hot wallet’ that controls a small proportion of their total bitcoins.
Customers of exchanges like to withdraw bitcoins from the exchanges by
clicking a button, causing an automated process to run to make and sign
a Bitcoin transaction moving bitcoins from the exchange’s hot wallet to
the user’s personal wallet. This means that somewhere, a private key
belonging to the exchange must be stored on a ‘hot’ machine connected to
the internet. There is a trade-off between security and convenience.
Online machines are easier to hack than offline machines, but can
automate the process of creating and broadcasting Bitcoin transactions.
Due to this trade-off, exchanges keep only a small fraction of BTC in hot
wallets, enough to satisfy customer demand, similar to banks that keep a
small amount of cash in tellers’ tills at branches.