How Is Ethereum Similar to Bitcoin?

Ethereum Has an Inbuilt Cryptocurrency

Ethereum’s token is called Ether, shortened to ETH. This is a

sovereign currencies, just like BTC. ETH ownership is tracked on the

Ethereum blockchain, just like BTC ownership is tracked on Bitcoin’s

Ethereum Has a Blockchain

Like Bitcoin, Ethereum has a blockchain, which contains blocks of data

(Pure ETH payments as well as smart contracts). The blocks are mined by

them. You can explore this blockchain on etherscan.io.

Like Bitcoin, Ethereum blocks form a chain by referring to the hash of the

Ethereum is Public and Permissionless

Like Bitcoin, the main Ethereum network is a public, permissionless

network. Anyone can download or write some software to connect to the

When people talk about Ethereum they usually mean the main public

permissionless version of the network. However, like Bitcoin, you can

that are not connected to the main public network. The private tokens

that are not connected to the main public network. The private tokens

and smart contracts won’t be compatible with the public tokens though,

electricity to find solutions to a mathematical challenge. Ethereum’s PoW

and allows more common hardware to be used. It is deliberately designed

to reduce the efficiency edge of specialised chips called ASICs, which are

common in Bitcoin mining. Commodity hardware is allowed to compete

efficiently, and this allows for a greater decentralisation of miners. In

practice though, specialised hardware has been created and so most

blocks in Ethereum are created by one of a small group of miners.

On Ethereum’s roadmap there is a plan to move from electricityexpensive,
proof-of-work mining, to a more energy-efficient, proof-ofstake
mining protocol called Casper in a future release of the Ethereum
software called Serenity. Proof-of-stake is a mining protocol in which
your chance of creating a valid block is proportional to the number of
coins (ETH) in your mining wallet—contrast this to proof-of-work, where
coins (ETH) in your mining wallet—contrast this to proof-of-work, where
your chance of creating a valid block is proportional to the amount of
computational cycles your hardware can crunch through.
How might this impact the community? For starters, this would
dramatically reduce the energy footprint of the cryptocurrency. Miners
will no longer need to consume electricity competitively in order to win
blocks. On the other hand, some people think that proof-of-stake is less
democratic, because those who already have accumulated a lot of ETH
will have a higher chance of winning more blocks. So, the argument goes,
new money will flow towards the wealthy, increasing the Gini
coefficient160 of Ethereum holders.
There are flaws in the ‘less democratic’ argument. With proof-of-work the
high capital costs and expertise required mean that only a very small
minority of people can actually make money mining, so it is not actually
that democratic. Whereas with proof-of-stake, every ETH has an identical
chance of winning a block, so you can get started with much less capital.
Think of it as an interest rate: If you have more money you get more
interest, but at least those with small amounts of money can still get
interest. I also think that reducing the negative externalities of pollution
caused by proof-of-work is a decent and honourable goal.
How Is Ethereum Different from Bitcoin?
This is where it gets more technical, and in many ways more complex.

The Ethereum Virtual Machine can run smart contracts
When you download and run the Ethereum software, it creates and starts
a segregated virtual computer on your machine called an ‘Ethereum
Virtual Machine’ (EVM). This EVM processes all the Ethereum
transactions and blocks, and keeps track of all the account balances and
results of the smart contracts. Each node on the Ethereum network runs
the same EVM and processes the same data, resulting in them all having
the same view of the world. Ethereum can be described as a replicated
state machine because all of the nodes running Ethereum are coming to
consensus about the state of the Ethereum Virtual Machine.
Compared with Bitcoin’s primitive scripting language, the code that can
be deployed in Ethereum and run as smart contracts is more advanced
and approachable for developers. We will describe smart contracts in
more detail later, but for now you can think of smart contracts as pieces
of code run by all the nodes in Ethereum’s Virtual Machine.
Gas
In Bitcoin, you can add a small amount of BTC as a transaction fee that
goes to the miner who successfully mines the block. This compensates the
miner for checking the validity of the transaction and including it in the
block they are mining. Likewise, in Ethereum, you can add a small
amount of ETH as a mining fee which goes to the miner who successfully
mines the block.
The complication with Ethereum is that there are more types of
transactions. Different transaction types have different computational
complexities. For example, a transaction performing a simple ETH
payment is less complex than a transaction to upload or run a smart
contract. Therefore, Ethereum has a concept of ‘gas’ which is a sort of
price list, based on the computational complexity of the different types of
operation you are instructing the miners to make in your transaction.
Operations include searching for data, retrieving it, making calculations,
storing data, and making changes to the ledger. Here is the price list from
the ethdocs.org website,161 but it can change over time if the majority of
the network agrees: 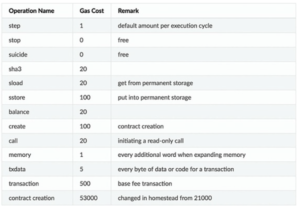 A basic transfer of ETH from one account to another uses 21,000 gas.
Uploading and running smart contracts uses more gas depending on their
complexity. When you submit an Ethereum transaction, you specify a gas
price (how much ETH you are willing to pay per gas used) and a gas limit
(the maximum amount of gas you will let the transaction use).
Mining fee (in ETH) = gas price (in ETH per gas) x gas consumed (in gas)
Gas price
The gas price is the amount of ETH you are prepared to pay per unit of
gas for the transaction to be processed. As with Bitcoin transaction fees,
this is a competitive market, and in general the busier the network the
higher the gas price people are willing to pay. In times of great demand
gas, prices spike.

Gas limit
The gas limit you set provides a ceiling for how much gas you are
prepared for a transaction to consume. This limit protects you from overspending
on mining fees and you know that the maximum mining fee will
be gas limit x gas price. This stops you over-paying if you accidentally
submitted a very complex transaction that you thought was simple.
Analogy time: Driving your car 10km will use up a certain amount of fuel.
If you run out of fuel, your car will stop before reaching the destination.
The price of fuel is dependent on market conditions and can go up and
down, but the price of fuel bears no relation to how far you may drive
your car with it. Gas in Ethereum is similar. When you submit an
Ethereum transaction, you specify how much gas you’re prepared to
spend on making the transaction ‘work’ (this is the gas limit), and how
much ETH you are prepared to pay the miner per unit of gas (this is the
gas price). This results in a total amount of ETH you’re prepared to pay
for the transaction to be processed.
The miner will execute the transaction and will charge you the amount of
gas taken, multiplied by the gas price you specified. As with Bitcoin, the
mining fee is up to you, and you need to bear in mind that you’re
competing with other transactions which may have set a higher gas price.
For example, a basic transaction of a transfer of ETH from one account to
another uses 21,000 gas, so you can set the gas limit for this kind of
transaction to 21,000, or higher; but it will only use 21,000 gas. If you set
the gas limit below the amount of gas it takes to process the transaction,
the transaction will fail and you will not be refunded your mining fee.
This is like trying to make a journey with insufficient fuel in your tank;
the fuel will be used, but you will not get to your destination.
ETH Units
Just like one dollar can be split into 100 cents, 1 BTC can be split into
100,000,000 Satoshi, and Ethereum too has its own unit naming
convention.
The smallest unit is a Wei and there are 1,000,000,000,000,000,000 of
them per ETH. There are also some other intermediate names: Finney,
Szabo, Shannon, Lovelace, Babbage, Ada—all named after people who
made significant contributions to fields related to cryptocurrencies or
networks.
Wei and Ether are the two most common denominations. Wei is usually
used for gas price (a gas price of 2-50 Giga-Wei per gas is common, where
1 GWei is 1,000,000,000 Wei). 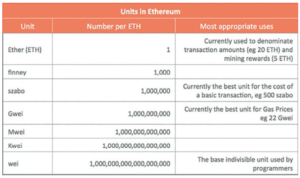 Ethereum’s block time is shorter
In Ethereum the time between blocks is around 14 seconds, compared
with Bitcoin’s ~10 minutes. This means that, on average, if you made a
Bitcoin transaction and an Ethereum transaction, the Ethereum
transaction would be recorded into Ethereum’s blockchain faster than the
Bitcoin transaction into Bitcoin’s blockchain. You could say Bitcoin writes
to its database roughly every 10 minutes, whereas Ethereum writes to its
database roughly every 14 seconds. The history of Ethereum’s block times
has been quite interesting, as you can see on bitinfocharts.com:

Source: Bitinfocharts162
Compare this with Bitcoin’s relatively stable block time (note the time
scale, as Bitcoin is much older than Ethereum):

Ethereum has smaller blocks
Currently, Bitcoin’s blocks are a little under 1MB in size whereas most
Ethereum blocks are about 15-20kb in size. However, we should not
compare blocks by the amount of data in them: While Bitcoin’s maximum
block size is specified in bytes, Ethereum’s block size is based on
complexity of contracts being run. It is known as a gas limit per block,
and the maximum is allowed to vary slightly from block to block. So
whereas Bitcoin’s block size limit is based on amount of data, Ethereum’s
block size limit is based on computational complexity.