Forks, or specifically chainsplits, are often described in the media as a
‘stock split’. This is a poor analogy because, in a stock split, more shares
are created and assigned to shareholders but the old and the new shares
all represent the same thing. This is not the case in a cryptocurrency
chainsplit. A ‘spinoff’ is a more accurate analogy because in a spinoff,
shareholders of the old company get new shares of a new company. This
is similar to a fork where holders of the original coin also get the new coin
which has different rules from the old coin.
which has different rules from the old coin.
Hard Forks vs Soft Forks
Sometimes the terms hard and soft fork are used. These terms refer to
changes in the rules about what constitutes a valid transaction and block.
A soft fork is a change in the rules that is backwards compatible, meaning
that blocks created under the new changed rules will still be considered
valid by participants who didn’t upgrade.
A hard fork is a change in the rules that is not backwards compatible, so
that if some participants fail to upgrade, there will be a chainsplit.
In practice, if changes to protocol rules are tightened or more
constrained, this results in a soft fork, whereas if consensus rules are
loosened, then this is a hard fork.
Case Study 1: Bitcoin Cash
Bitcoin Cash189 is a (currently) successful fork of Bitcoin, created as a hard
fork. Bitcoin Cash and Bitcoin (sometimes called Bitcoin Core to reduce
confusion) had a shared history until block 478,558 when the chain split.
The philosophy of Bitcoin Cash is to more accurately reflect the vision in
the original Satoshi whitepaper of fast, cheap, decentralised, censorship
resistant, digital cash, and proponents believe that Bitcoin Core has not
been making progress towards this vision.
So far, Bitcoin Cash has been regarded as successful, as it is supported by
popular wallet software, merchants accept it, and it trades on popular
cryptocurrency exchanges under the ticker symbol BCH.
Case Study 2: Ethereum Classic
Ethereum Classic is a (currently) successful fork of Ethereum. It was
Ethereum Classic is a (currently) successful fork of Ethereum. It was
created, as we saw earlier, after The DAO was hacked and more than
$50m of ETH was drained from it. As we have seen, the Ethereum
community deliberated as to what to do and the majority decided to hard
fork at block 1,920,000 and restore the hacked ETH to the original
holders.
But a minority of the community saw this restoration as revisionist and
anti-ethical and refused to hard fork, so they continued on with the
original blockchain, theft and all. So in a sense, Ethereum itself is the
fork, as it had additional code to neutralise the hack of The DAO, and
Ethereum Classic is the original Ethereum. But because Classic was in the
minority, it is regarded as the fork.
Ethereum Classic trades on cryptocurrency exchanges under the ticker
symbol ETC and is widely supported by wallets.
Other Forks
Forks are trendy. It is easier to take something that is proven to already
work than to build something from scratch. And, as cryptocurrencies
tend to be open source, it is legal to copy the code, tweak it, and run it.
Community building with a forked chain is easier than building a new
blockchain too. Anyone who had a balance on the original chain will also
have a balance on the new chain, so they are more likely to support a fork
where they have a balance, rather than support a new blank blockchain.
People saw that Bitcoin Cash successfully forked and retained some
currency value, so this spurred many copycats to try the same. However,
there is only so much energy in the cryptocurrency space, and there
seems to be some ‘fork fatigue’. Some commentators predict that many
future forks will fail.
BitMEX research190 provides a list of forks that have happened since the
Bitcoin Cash fork: 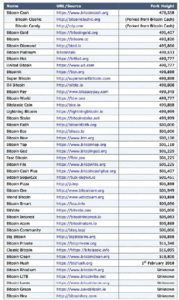 WHAT ARE DIGITAL TOKENS?