The word mining came into use precisely on the analogy of gold mining. Mining
is the process of producing new cryptocurrency or Bitcoins. Owners or operators
of mining devices are called miners. Often, the term miner is used to denote the
computing device needed to spot Bitcoin (or another cryptocurrency) in the
network.
Mining occurs by figuring out the digital signature of a block. A block in Bitcoin
network is an array of data containing the information about transactions that hit
the network after the previous block was created. A network participant, who has
figured out the digital signature, is rewarded with cryptocurrency. At the same
time, to get a “gold bar” in the form of a precious generating transaction, a miner
needs to sift through tons of “dead rock,” i.e. hashes unfit for the block.
Thus, each new block contains a digital signature which is formed on the basis
of the previous block. The blocks adhere to each other and form a chain of
blocks called Blockchain. 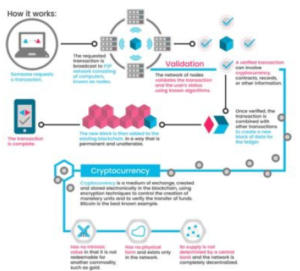 Most people think mining is money derived from an electrical outlet . But in
fact, it’s a great piece of painstaking work, which is rewarded with money by the
system itself. Despite the fact that the client code and the cryptocurrency
protocol code are fully open, creating new coins is a complex and expensive
process. For example, you cannot generate more bitcoins than planned by the
creator of the technology. To get new coins, you need substantial investments in
equipment, premises, cooling systems, electricity, etc. That is why Bitcoin is
called “digital gold” and is depicted in the form of gold coins. 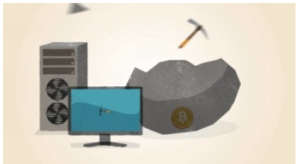 Let’s now answer the following question: Why does cryptocurrency need
miners? There is a misconception that miners initially generated cryptocurrency.
In fact, miners run the essential functions of the network:
Confirmation of transactions
Protection of the network from entering false information
(fake transactions and blocks)
Protection of the network from various types of attacks
Maintenance of the network decentralization.
That is why the more mining devices in the network, the better the Bitcoin
network is protected from any attacks. At the same time, the shutdown of part of
its computation capacities will not halt transactions in the network. The network
will continue operating if at least one miner works.
There are several types of mining. A home farm is one of them. It might look
like this. 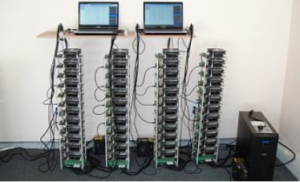 To date, specialized ASIC or GPU (graphics processing unit) chips are used for
mining. ASIC is designed specifically for mining. It is a “soulless robot” which
is tooled for extracting crypto coins. As for GPU mining, an ordinary farm
usually consists of several video cards of one model, a forceful power supply, a
motherboard with several PCI-Express slots, and processor with a cooling
system. There are certain algorithms upon which coins work. You should select
video cards depending on these algorithms.

What should you choose for mining: ASIC or GPU?
ASIC is easy to service and convenient to install. However, it is designed only
for certain coins, and you will not be able to switch between them. If you choose
ASIC, you will have to mine successfully enough to pay your electricity bills
because you’ll need a lot of electronic equipment.
As for GPU, unlike ASIC, you will be able to sell your video card easily and at a
profit if you decide to give up mining at some point.
In my personal opinion, you need to have both ASIC and GPU for mining. If one
of the devices fails, you can use the second one.
There is another option for people who do not want to get down to assembling a
“money machine.” You can mine remotely using shared processing power. This
type of mining is called cloud mining. However, you should beware of the
dangers of cloud mining. First, the payback period is quite deceptive. Second,
you cannot control expenses and profit. Moreover, all the equipment is not in
your personal property.
If you still decide to entrust mining to other people, then pay attention to the
following things: you should not be given an enormous profit forecast, and you
should be provided with the possibility to get in touch with technical support. I
also advise you to read reviews and monitor the mining forums in regards to
these companies as well as investing small amounts of money for testing
purposes before investing more money.
In mining, like in trading, you should obey certain rules of security. The first
rule of the so-called “mining club” is not to tell anyone where your farms are
located. Is it a trivial tip? You may think so. But remember that you must be the
only person to have access to the premises with your mining equipment.
Other security principles are as follows:
Install the system to monitor indicators (temperature,
etc.) as well as video surveillance and a fire fighting
system on the premises
Check the electricity, power, and earthing
Monitor device heating and humidity on the premises
Don’t skimp on consumables as this may lead to a sad
outcome.
By and large, mining does not suit everyone because you need to be able to
negotiate with equipment suppliers, collect and configure the equipment
yourself, and further maintain and ensure its security.
In fact, the topic of mining is quite profound, and I can talk much more about it.
For example, I could tell you about the characteristics of power supplies,
motherboards, and cooling systems; how to choose your operating system; what
kind of cards are worth buying; how to work with suppliers and even share the
secrets of payback. You can find the answers to all these questions in a free
bonus book entitled Cryptocurrency Mining.