Quantitative Easing (QE) often comes up in conversations about fiat
currencies, and people describe it as ‘printing money,’ but it is not that
currencies, and people describe it as ‘printing money,’ but it is not that
simple. QE is a euphemism for an issuing authority (generally a central
bank) increasing the amount of fiat money in circulation in order to
stimulate a flagging economy. So people worry that this additional money
‘dilutes’ the value of existing money, and this makes people worry about
the sustainability of the fiat system.
‘Printing money’ is a poor description for QE. Think about it—if the
central bank really ‘printed money’ whether physically or digitally, who
would it give it to, and how?
So how does QE work? The central bank buys assets, usually bonds, from
the private sector (commercial banks, asset managers, hedge funds, etc)
in the secondary market. These are bonds that have already been issued
and are now traded by financial market participants. Central banks
broadly think of the private sector as having a balance of two things:
money, and non-money (other financial assets). And central banks can, to
some extent, control that balance by buying financial assets from the
private sector to add money, or by selling financial assets to the private
sector to remove money.
Why bonds? Because we take comfort that our central banks only own
safe assets, and bonds are generally regarded as safe—or at least safer
than other financial instruments. Their value is also affected by interest
rates, something that a central bank has some degree of control over.
Who can central banks buy bonds from? Certainly not you or me directly
because we don’t have that kind of relationship with central banks. As we
will see in the next section, central banks have financial relationships
with certain commercial banks called clearing banks, who have accounts
called reserve accounts with the central bank. So central banks buy bonds
from clearing banks, and they pay by crediting the banks’ reserve account
with new money. Clearing banks can also act as an agent for other
with new money. Clearing banks can also act as an agent for other
bondholders who wish to sell bonds to the central bank through the
clearing banks.
Central banks start the QE journey by buying government bonds (US
treasuries, etc) because they are considered the least risky bonds. When
they run out of those to buy, they then move to more risky bonds, such as
those issued by corporations. The problem is that the central bank ends
up with a bunch of risky bonds on its balance sheet—and remember that,
from a balance sheet perspective, it is the bonds that ‘back’ the currency.
There are two worries with QE:
1. With excessive QE, the value of money will go down as there is more
of it sloshing around in the private sector, which is not great for
savers, and could also cause price inflation (though we haven’t seen
this yet).
2. A central bank owns risky financial assets that could go down in
value, damaging the central bank’s balance sheet when the value of
the assets it owns falls.
We can see the impact that QE has had on central bank balance sheets
since the most recent global financial crisis: 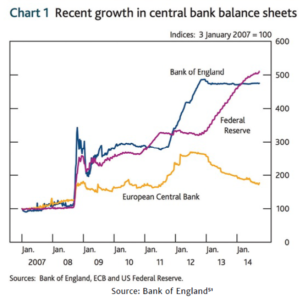