What are the benefits of Cryptos and what problem do they solve?

The new digital revolution of money.
Cryptocurrency has many appealing benefits. Some of this is thanks to the blockchain technology previously mentioned. It is a strictly monitored process with encrypted transaction and control.
A quick history of money
Since the beginning of human time, people have used something scarce as a source of value. At the start they used bartering one object for another. But how can you buy a cow if you only have two chickens? A third entity was needed, so they used the scarcest of seashells. Then came coins made of precious metals. At the beginning, coins did not have a value stamped on them, rather the coins were weighed. Only later was an actual value stamped onto the coin. 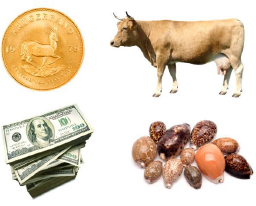 Next was paper money backed by precious metal e.g. Gold. The idea was that you could literally walk into a bank and ask for the equivalent of your bank notes in Gold. Then paper was taken off the Gold Standard and was not backed by anything, allowing the printing of money to flourish. This is the current ‘fiat’ money.

The problem is that fiat money is not scarce. More money can be printed and so every year it is worth less and less. The only store of value that retains its value is Gold. But Gold is not easy to store, not easy to sub-divide and not easy to transport.
For a full breakdown of the timeline of the History of Money, see Appendices.
Scarcity is an essential part of cryptos. Take the largest, Bitcoin for example. As already stated, only 21 million will ever be made, so scarcity is part of the system.
1. No Third-Party Involvement
There’s always a process you go through when using traditional money to buy yourself a new property, set up your own business or buy a new car etc. One way or another, the process requires a third-party involvement. We are talking lawyers, owners and some other external factors such as delays, documentation, extra fees etc. This in general will consume unnecessary time, money and energy to the point of giving up in some cases.
Recently, I wanted to send some money over to the USA. In order to do that, I had to pick up the phone to my bank. I was stuck in a queue listening to music for over eight minutes just to start the process. I was then charged for sending the money plus an extortionate Foreign Exchange rate which did not resemble the real rate. Finally, since the transaction was via something called an intermediary bank, I was told that they would likely charge me as well, although they could not tell me how much. The money, I was told, would be there within 3-5 working days. Since it was a large amount of money the whole thing probably cost me over $200 if you include the Foreign Exchange spread, maybe more. I agreed to everything because, well, I didn’t have many alternatives.
With cryptos, I can send Bitcoins directly to the other person from my computer to theirs online, within 10 minutes. There is no spread, no Foreign Exchange (Forex) charge, intermediaries etc. And the whole thing might cost me $10 maximum.
So if you want to save a lot of time and money then cryptos are the way to go.

In short, you are in control of your own money using cryptocurrency. This is what we call the ‘decentralised’ system. It is possible to be able to pay and receive money anywhere in the world at any given time. Your transactions are practically immune to any influence from your Government, with minimum processing fees, thus preventing users from having to pay extra charges from banks or any financial institutions.
Now imagine this in EVERY part of society – from legal contracts between two companies to sending money across the world; from keeping money in escrow when buying a house to online payments. Basically, anywhere where there is currently a ’middleman’ who is either 1. Slowing it down, or 2. Making it more expensive.

Lower risk than traditional currencies and Protection from fraud