WHAT IS COMMON TO BLOCKCHAIN TECHNOLOGIES?

Blockchains usually contain the following concepts:
1. A data store (database) that records changes in the data. Up to now
they have most commonly been financial transactions, but you can
store and record changes to any kind of data in a blockchain.
2. Replication of the data store across a number of systems in real time.
‘Broadcast’ blockchains, such as Bitcoin and Ethereum, ensure that
all data is sent to all participants: everyone sees everything. Other
technologies are more selective about where data is sent.
3. ‘Peer-to-peer’ rather than client-server network architecture. Data
may be ‘gossiped’ to neighbours rather than broadcast by a single
coordinator acting as the golden source of data.
4. Cryptographic methods such as digital signatures to prove
ownership and authenticity, and hashes for references and
sometimes to manage write-access.
I often describe blockchain technology as ‘A collection of technologies, a
bit like a bag of Legos’. You can take different bricks out of the bag and
put them together in different ways to create different results.
Sometimes when discussing specific potential uses for this technology, we
hear this exchange:
‘But, you don’t need a blockchain to do that. You can just use traditional
technology!’
‘So how would you do it?’
‘Oh, some data storage, some peer-to-peer data sharing, cryptography to
ensure authenticity, hashes to ensure data tampering is evident etc’.
‘But you’ve just described how blockchains work!’
So blockchains are not themselves a new invention, but instead, they put
So blockchains are not themselves a new invention, but instead, they put
together existing technologies to create new capabilities.
What’s the difference between a blockchain and a database?
A common database is a system which simply stores and retrieves data. A
blockchain platform is more than that. It stores and retrieves existing
data just as a normal database does. It also connects to other peers and
listens for new data, validates new data against pre-agreed rules, then
stores and broadcasts that new data to other network participants to
ensure that they all share the same updated data. And it does so
constantly, without manual intervention.
What’s the difference between a distributed database and a
distributed ledger?
Replicated databases, where data is copied in real time to multiple
machines for resiliency or performance reasons are not new. Sharded
databases, where the workload and storage are sharded, or spread around
multiple machines, usually to increase speed and storage, are also not
new. With distributed ledgers or blockchains, however, participants do
not need to trust each other. They do not work on the assumption that the
other participants are behaving honestly, so each participant individually
checks everything. Richard Brown describes this in his blog202 as a
difference in trust boundaries: 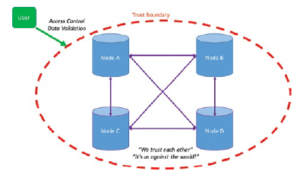 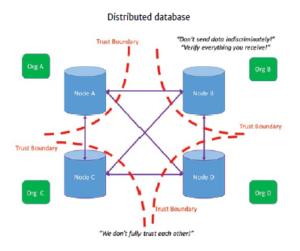 WHAT ARE BLOCKCHAINS GOOD FOR?