Earlier, we discussed that projects take different actions based on
whether they think their token is, or could be classified as, a financial
security. The classification of a token as a security is important as it
impacts who can do what with the token, because activities relating to
financial securities are regulated in most countries. Note that tokens
themselves are not regulated, but activities relating to them are.
So how do we decide if a token may be classified as a security or not? In
the USA, the ‘Howey Test’ is a well-known test that was created by the
United States Supreme Court in 1946 during a case ‘SEC vs. Howey’.
According to the FindLaw website233:
In Howey, two Florida-based corporate defendants offered real estate contracts for tracts of
land with citrus groves. The defendants offered buyers the option of leasing any purchased
land back to the defendants, who would then tend to the land, and harvest, pool, and market
the citrus. As most of the buyers were not farmers and did not have agricultural expertise,
they were happy to lease the land back to the defendants.
The SEC sued the defendants over these transactions, claiming that they broke the law by not
filing a securities registration statement. The Supreme Court, in issuing its decision finding
that the defendants’ leaseback agreement is a form of security, developed a landmark test for
determining whether certain transactions are investment contracts (and thus subject to
securities registration requirements). Under the Howey Test, a transaction is an investment
contract if:
1. It is an investment of money
2. There is an expectation of profits from the investment
3. The investment of money is in a common enterprise
4. Any profit comes from the efforts of a promoter or third party
Although the Howey Test uses the term ‘money,’ later cases have expanded this to include
investments of assets other than money.
So each token offering could be checked against the Howey Test to
determining whether the tokens qualify as ‘investment contracts’. If so,
then under the Securities Act of 1933 and the Securities Exchange Act of
1934, those tokens are considered securities and so activities relating to
them are subject to certain requirements in the USA.
In February 2018, the Swiss financial regulator FINMA issued
guidelines234, saying that tokens can fall into one or more of the following
categories, described below:
Payment tokens are synonymous with cryptocurrencies and have no
further functions or links to other development projects. Tokens may in
some cases only develop the necessary functionality and become
accepted as a means of payment over a period of time.
Utility tokens are tokens which are intended to provide digital access
to an application or service.
Asset tokens represent assets such as participations in real physical
underlyings, companies, or earnings streams, or an entitlement to
dividends or interest payments. In terms of their economic function,
the tokens are analogous to equities, bonds or derivatives.
FINMA suggests the following framework235, for determining whether a
token is a financial security or not, and this seems reasonable in the
current stage of industry development: 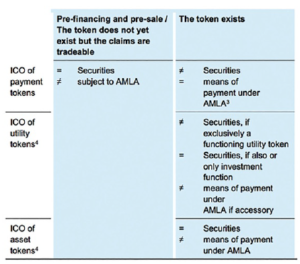 In June 2018, William Hinman, Director, Division of Corporate Finance
at the United Stated Securities and Exchange Commission (SEC) said in a
speech236,
‘Based on my understanding of the present state of Ether, the Ethereum network and its
decentralized structure, current offers and sales of Ether are not securities transactions. And,
as with Bitcoin, applying the disclosure regime of the federal securities laws to current
transactions in Ether would seem to add little value’.
He differentiates the manner in which something (a token) is originally
sold, and the later use and sale of the token. A token can have utility and
also be offered as an investment contract, i.e., a financial security. He
explains,
‘The oranges in Howey had utility. Or in my favorite example, the Commission warned in the
late 1960s about investment contracts sold in the form of whisky warehouse receipts.
late 1960s about investment contracts sold in the form of whisky warehouse receipts.
Promoters sold the receipts to U.S. investors to finance the aging and blending processes of
Scotch whisky. The whisky was real—and, for some, had exquisite utility. But Howey was not
selling oranges and the warehouse receipts promoters were not selling whisky for
consumption. They were selling investments, and the purchasers were expecting a return
from the promoters’ efforts’.
This means that, irrespective of what a token represents, the manner in
which it is offered and the utility of the token at the time of offering is
important. We will see over the coming years how this important speech
impacts the manner in which ICOs are conducted.
Conclusion
Although we are in the early stages of the token industry, we can see that
it is already beginning to mature.
In early ICOs, projects would write disclaimers in small print stating that
the tokens are not an investment or a security, hoping that this would be
enough to protect them. These investment rounds were sometimes
described by the projects as ‘donations’ or ‘contribution rounds’ in order
to disassociate with legally sensitive terminology. There was a clear
disconnect between investor expectations of the tokens and the wording
in the investor documents. Unfortunately for those with that view,
wording matters less than the economic realities, as projects are finding
out. 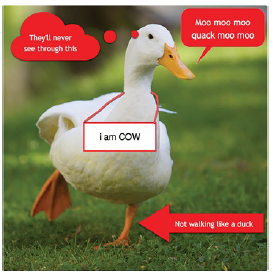 In 2017, there was a wave of attempts to self-regulate and create industry
standards. Projects trying to do the right thing looked for regulatory
clarity. Today, the amount of money at stake is significant, and regulators
and policymakers are catching up with token sales. This is a good thing
for the maturity of the industry, as regulatory clarity can attract
investment and allow projects the opportunity to focus on business rather
than legal uncertainty.
Regulators are now clarifying what they will and won’t accept, and in
light of clarifications, projects are moving to comply with or avoid
regulation. Different regulators may take different approaches, creating
opportunities for projects to select the most favourable operational
jurisdictions. I am looking forward to the next few years when more
projects deliver products and we learn how to quantitatively put a value
on tokens. The economics of tokens, or tokenomics, are yet to be fully
described or understood.