Who is Satoshi Nakamoto?

We now come to the question, who is Satoshi Nakamoto and why does it
matter?
Satoshi was the author of the Bitcoin whitepaper and was active on
cypherpunk mailing lists where like-minded people discuss ways of
cypherpunk mailing lists where like-minded people discuss ways of
reclaiming personal privacy in the electronic age. After publishing the
original whitepaper, Satoshi continued to participate on Bitcoin forums
until December 2013, and then vanished.
Satoshi also owns or controls a significant number of bitcoins, estimated
in 2013 by cryptocurrency security consultant Sergio Lerner148 at 1 million
bitcoins. This represents just under 5% of the total 21m bitcoins that will
ever be created, if the protocol rules don’t change. At 2018, prices of
around $10,000 per Bitcoin, this puts the nominal value of the bitcoins
controlled by Satoshi at $10bn. If Satoshi ever moves any bitcoins
thought to be associated with him/her, the community would
immediately find out. The transactions would be visible on the blockchain
and addresses thought to be associated with Satoshi are monitored. This
would almost certainly affect the price of Bitcoin149.
Satoshi’s real-world identity matters because, if the real person or group
of people were discovered, their views and voice could dominate the
future of Bitcoin. However, this centralisation is what they are trying to
avoid. They would also have extremely high personal security risk. It is
never a good idea for people to know (or even believe) that you have
significant amounts of wealth, especially in cryptocurrency.
We have seen a number of high profile cryptocurrency owners publicly
state that they have sold all their cryptocurrencies. In Jan 2018, Charlee
Lee, founder of Litecoin (LTC) publicly stated that he sold or donated all
his LTC150. In the same month, Steve Wozniak, founder of Apple, also
stated that he had sold all of his Bitcoin151. Although they have their
reasons, I suspect that the high personal risk of being known owners of
high valued cryptocurrencies also feeds into this. I have had
conversations with lucky Bitcoin owners who do not disclose their
cryptocurrency wealth for precisely this reason.
There have been a number of high profile attempts at exposing Satoshi’s
identity. These are known in the industry as ‘doxxings’: the public
revelation of an internet nickname’s real-world identity. It is however
highly unlikely that the real truth about Satoshi’s identity is among these
doxxings.
On 14 March 2014, a cover article for Newsweek magazine claimed that
Satoshi was a sixty-four-year-old Japanese gentleman named Dorian
Nakamoto (birth name Satoshi Nakamoto) living in California. 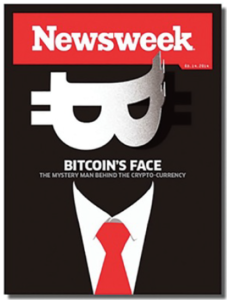 The article printed the suburb where Dorian lived and included a
photograph of his house. This led to repeated harassment of Dorian and
his family over the course of the next few weeks. Of course, Dorian was
not Satoshi. To think that the privacy loving cypherpunk creator of a
revolutionary unstoppable anonymous digital currency would use his
own name as his pseudonym is so far-fetched as to be ludicrous. To
identify his home address is unethical. Nevertheless, and despite the best
efforts of the journalist concerned, anecdotal evidence suggests that after
a period of great distress, Dorian is now enjoying, and I hope monetising,
his newfound fame as the real fake Satoshi.
In December 2015, an article in WIRED Magazine152 suggested that Dr
Craig Wright, an Australian computer scientist, could be the mastermind
behind Bitcoin. In March 2016, in interviews with GQ magazine153, the
BBC,154 and The Economist newspaper,155 Craig claimed to be the leader of
the Satoshi team. He even published his own blog post, now taken offline,
with these claims. Craig suggested that he didn’t want to self-doxx, and
that there may have been external pressures on him to do so. In June
2016, the London Review of Books published a long form article156 where
the journalist, Andrew O’Hagan, was able to spend an extended amount
of time with Craig Wright. This is well worth a read in full, and my
favourite part is:
Weeks later, I was in the kitchen of the house Wright was renting in London drinking tea with
him when I noticed a book on the worktop called Visions of Virtue in Tokugawa Japan. I’d
done some mugging up by then and was keen to nail the name thing.
‘So that’s where you say you got the Nakamoto part?’ I asked. ‘From the eighteenth-century
iconoclast who criticised all the beliefs of his time?’
‘Yes’.
‘What about Satoshi?’
‘It means “Ash,” ’ he said. ‘The philosophy of Nakamoto is the neutral central path in trade.
Our current system needs to be burned down and remade. That is what cryptocurrency does
—it is the phoenix …’
‘So, Satoshi is the ash from which the phoenix …’
‘Yes. And Ash is also the name of a silly Pokémon character. The guy with Pikachu’. Wright
smiled. ‘In Japan the name of Ash is Satoshi,’ he said.
‘So, basically, you named the father of Bitcoin after Pikachu’s chum?’
‘Yes,’ he said. ‘That’ll annoy the buggery out of a few people’. This was something he often
said, as if annoying people was an art.
Alas, the cryptographic proofs and demonstrations that Dr Wright
performed on and off camera were not watertight, and the community is
still undecided as to the veracity of his claims.
A few other Satoshi suspects have been cypherpunk and PGP developer
Hal Finney, smart contract and Bit gold inventor Nick Szabo,
cryptographer and creator of b-money Wei Dai, e-donkey, Mt Gox, and
Stellar creator Jed McCaleb, and Dave Kleiman. Coindesk has a more
extensive list157 of those suspected to be Satoshi.
My bet is that Satoshi Nakamoto is not an individual but a pseudonym for
a group of people who have similar political views and who wish to
remain anonymous. Craig Wright may have been part of that team. The
team may not even know each other’s real-world identities. Some of the
team may have died since Bitcoin’s popularisation. We may get another
clue in 2020 when the roughly 1 million BTC locked in the Tulip Trust
will be accessible. The Tulip Trust is a trust fund supposedly created by
Dave Kleiman, an associate of Satoshi. It contains early bitcoins
potentially owned by Satoshi.
If you decide to do some sleuthing, there are a few things to remember
that people seem to have forgotten: A digital signature proves possession
and use of a private key, but private keys can be shared among multiple
people. So you cannot guarantee the mapping of private key to an
individual. Private keys can also be lost. An email address can be shared.
A whitepaper can be written collaboratively, so grammatical clues simply
reveal the habits of the editor, not necessarily those of the author. It is
very hard to tie the identity of an individual to the author of a paper.
On the other hand, it may be better if Satoshi is not found.