Lack of Financial Regulation and The Ability to Fund Black Market
Activity
One of the biggest strengths of cryptocurrencies is also a weakness in the
system. The anonymity they provide allows them to be used to facilitate large
scale black market operations and their usage for purposes of money laundering.
For example, Silk Road – an underground dark net marketplace acted as a black
market for illegal drugs. Payments were made in Bitcoin to protect the
anonymity of buyers and sellers. The site was shut down in 2013 after amassing
roughly $1.2billion in revenue. Founder Ross William Ulbricht was convicted of
8 charges and sentenced to life in prison.
Another nefarious use of cryptocurrency is in ransomware. Ransomware refers
to malicious software that hackers install on a user’s computer, then demand
payment in Bitcoin to unscramble the software and allow the victim to access
their data again. Ransomware schemes gained in popularity as using
cryptocurrency as a means of payment means the people behind the attacks can
seamlessly receive their ransom without revealing their identity.
Hackers
The elephant in the room regarding cryptocurrencies, with any early stage
technology (which cryptocurrency very much is) there are bound to be breaches
in security. Hackers have been responsible for some of the largest dips in the
cryptocurrency market.
Tokyo based Bitcoin exchange Mt. Gox suffered losses of over $27.2 million
and users lost over $460 million worth of Bitcoin after the exchange was hacked
in 2011. At the time it was the largest cryptocurrency exchange on Earth. Amid
talk of lazy management, and poor security protocols, the exchange ended up
going bankrupt after the hacking incident.
Bitfinex, a Hong Kong based exchange was hacked in 2016 and its customers
lost roughly $72 million worth of Bitcoin.
It is important to note that any hacking incidents regarding Bitcoin or other
cryptocurrencies were done at the exchange or wallet level – not at the
technology level. For further information on how to safely store your
cryptocurrency

Data Loss and Human Error
If properly secured, cryptocurrencies will facilitate a shift away from physical
cash which can degenerate and erode over time. As the data is encrypted and
stored online, there is no way anyone (bar hackers) can access your funds.
However, this theory assumes perfect accountability from the user. As you may
have figured out by now, none of us are perfect. We lose things. For example,
we can lose our private encryption keys if they are stored on paper, or devices
can become damaged or stolen if we are using physical encrypted wallets (like
USB wallets).
Speculation and Misinformation
As previously mentioned, Bitcoin, and cryptocurrencies in general are a frontier
technology. As such, mainstream media outlets, many of whom do not employ
experts in the field, are liable to present misinformation regarding the
technology, and the market itself. Blanket statements such as “Bitcoin is better at
being gold, than gold” do nothing but undermine the technology in the long run –
but do make good soundbites for mainstream media
In June 2017, the Ethereum market briefly crashed after unsubstantiated rumors,
perpetrated by 4Chan, claimed that founder Vitalik Buterin had died in a car
crash. The hoax caused the market value to drop by around $4 billion in under
24 hours. This demonstrates that the volatility of the market in general is subject
to manipulation by nefarious forces.
If you are planning on trading cryptocurrencies, you must be willing to
experience sharp drops and rises in the market, far larger movements than
traditional stocks. This is where being a rational trader will help you
tremendously.
China
China’s relationship with cryptocurrency is unlike any other country. No single
nation has done more for the success of cryptocurrency than the Middle
Kingdom itself. Cryptocurrencies are popular among Chinese investors due to
the government’s strict controls on their fiat currency, the Yuan. The biggest one
of these being their currency devaluations, which hurt its value for trading and
investing purposes.
This has led to many private individuals, both wealthy and non-wealthy, looking
for alternative ways to grow their wealth. Cryptocurrencies are viewed by many
as a more stable asset when compared to traditional investments. China’s large
quantity of cheap energy has also made it a hotbed for the cryptocurrency
mining scene, which is now financially out of reach of most regular Western
European or Americans. Around 70% of the global cryptocurrency mining scene
is located in China.
China is also liable for mass information manipulation. Mistranslations, rumourmongering
and coin pumps are all more susceptible in the Chinese market due to
the lack of availability of foreign media – especially in the cryptocurrency space.
In June 2017, the People’s Bank of China (PBoC) issued a statement addressing
false reports that the central bank was issuing cryptocurrency itself. The reports
were thought the be part of a pyramid scheme to gain investors under the false
pretense of a government backed cryptocurrency.
Survivorship Bias & Gambler’s Fallacy
Contrary to what you may be seeing on internet forums & social media. There
are people who have lost money in cryptocurrency. It’s simply a matter of
buying and selling at the wrong time.
It’s the same reason casinos continue to do so well in part, the winners brag to
their friends and family, while the loser stay silent.
Remember: Never invest more than you can afford to lose
This cartoon from XKCD sums it up perfectly. 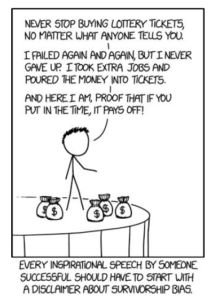 How to Buy Cryptocurrency