In this section, I describe some considerations to help you decide whether
investing in cryptoassets is right for you. There are many risks, but the
markets are exciting and people have made and lost fortunes in the these
markets.
PRICING
How do you put a value on cryptocurrencies or cryptoassets? For tokens
that are a claim on an underlying asset such as 1 oz of gold, the price of
the token should more or less track the price of the underlying asset.
However, as previously discussed, cryptocurrencies are not a claim on
any asset, nor are they backed by an entity. Is there a way to calculate a
fair value for them?
We can ask three independent questions:
1. What is the current price of the cryptoasset?
2. What causes prices to change?
3. What should the price be?
What is the current price of the cryptoasset?
The current price of any asset is determined by the market. Cryptoassets
trade on one or more exchanges, and both prices and liquidity can differ
between exchanges. Exchanges that report the most trade volume provide
a good measure of the price, as they are the most active and should have
the most liquidity. Other exchanges may have higher or lower prices.
Coinmarketcap.com is one of many websites that provide data about the
current price of tokens and which exchanges they trade on. If you click on
the name of a token and then click on ‘Markets,’ you can see where that
token trades and how much volume the exchange says it has traded. Note
that some exchanges have been caught faking trade volume in order to
generate business, and I am not confident this practice has been
eliminated… beware!
What causes prices to change?
The prices of cryptocurrencies and tokens behave like any other financial
asset, driven by buyers and sellers who make trading decisions based on
various factors:
1. Sentiment (how traders feel about the asset)
2. Gossip and chatter on forums and social media sites
3. Technical successes (e.g., when blockchains successfully implement
technical upgrades that make them more useful, or when an ICO
makes progress on its roadmap)
4. Technical failures (e.g., if transactions slow down or a weakness is
found in the way the blockchain operates)
5. Celebrity endorsements (e.g., Paris Hilton’s endorsement of
LydianCoin in Sept 2017, or John Mcafee’s occasional promotional
tweets)
6. Founders getting arrested (e.g., when the founders of Centra token
were arrested in the USA, and the price of the tokens fell by 60%237)
7. Orchestrated Pump & Dumps where people coordinate to all buy a
coin together to make the price go up and persuade others to buy it
at a higher price, then sell the coins to unsuspecting new buyers
8. Manipulation by large holders of any particular token 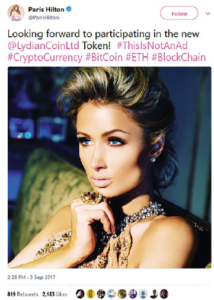 A celebrity endorsement
What should the price be?
There have been a number of attempts to create models to find a fair
value for cryptocurrencies and tokens. A common but flawed model for
putting a value on a Bitcoin is the ‘if the money in gold went into Bitcoin’
model:
model:
‘If x% of the money in gold (or other asset class) moved into Bitcoin, a single Bitcoin should
be worth $y’.
The argument is as follows: The total value of gold in circulation is
estimated at 8 trillion US dollars. If some small proportion of the people
holding gold, say 5% (but you can use any number from 0-100% here),
sold their gold for dollars, it would release a large amount of money, in
this case $400 billion. If the dollar proceeds were used to buy bitcoins,
the total value of bitcoins in circulation, commonly referred to as ‘market
capitalisation’ or ‘market cap,’ would increase by the same amount, $400
billion. As we know, the total number of bitcoins in circulation, 17 million
or so, then this must increase the price of each Bitcoin by $23.5k
($400bn / 17m).
But this logic is wrong. That is not how financial markets work at all. The
‘money going into Bitcoin’ doesn’t simply drop into the ‘market cap’. The
reason is simple: When you buy $10,000 worth of Bitcoin, someone else
is selling those bitcoins for $10,000. So any money ‘pumped in’ is also
exactly equal to money ‘pumped out’ (excluding exchange fees, to keep
things simple). The only thing that happens when you buy a Bitcoin is
that the Bitcoin changes ownership and some cash changes ownership.
There is no mathematical relationship between how much money you
spend buying bitcoins from someone else and the market cap of Bitcoin.
Let’s put numbers to this and demonstrate the flawed logic with a
counterexample… Let’s say the last price paid for BTC was $10,000. So
the ‘market cap’ of Bitcoin, assuming 17 million Bitcoin outstanding, is:
$10,000 x 17m = $170,000,000,000 ($170bn)
Now, let’s say you want to buy a tiny amount of BTC (say $10 worth), and
the best price that you can see is $10,002. So you pay $10 and buy
0.0009998 BTC ($10 divided by $10,002 per Bitcoin). What has
happened to the ‘market cap?’ It is now: $10,002 x 17m =
$170,034,000,000.
The market cap has increased by $34 million just because of your measly
$10 trade! You didn’t ‘pump in’ $34 million, but the market cap increased
by that amount. So clearly the earlier argument is wrong.
Having said that…of course if there are more buyers with a greater desire
to buy and pay whatever it takes to accumulate BTC, then the prices will
increase. Likewise, if there are sellers who will sell bitcoins at any price,
then prices will fall.
I also hear variations on, ‘cost of creation’ argument: The price of Bitcoin
should be at least the cost of mining them, so the cost of mining puts a
floor under the price of Bitcoin, and as difficulty increases, it costs more
to mine bitcoins, so the price should rise. Alas, this is also false. The cost
incurred by a miner (or even all the miners in aggregate) bears no
relation to the market price of Bitcoin. The price of Bitcoin affects the
profitability of miners, but there is no rule dictating that miners need to
be profitable. If a miner is unprofitable, they will eventually stop mining,
but this doesn’t affect the price of bitcoins. If it costs me $5,000 to dig up
1 oz of gold, this doesn’t mean the price of gold should be at least
$5,000/oz. User ihrhase explains this with salmon and sauerkraut
smoothies in a forum post239 in 2010:

Unfortunately, I have not yet come across a reasonable fair value model
for cryptocurrencies.
ICO tokens should be easier to price. These tokens are redeemable for a
certain good or service in the future, so putting a price on the token
should be a case of figuring out what that good or service is worth. Right?
Alas, it is never that easy. The fact is that ICOs who issue tokens want the
price of their tokens to go up, as do their investors. Redemption is always
described generically and not quantified. For example, they say, ‘Tokens
will allow you access to cloud storage,’ rather than, ‘One token will give
you 10 GB of cloud storage for 1 year starting in 2020’. This is a deliberate
strategy. If the issuers quantified the goods or services, you could figure
out an appropriate ballpark price for the token. But this would constrain
the price, preventing the price of the token from massively increasing
(which is really what ICO issuers and investors really want). I have never
seen an ICO whitepaper quantify exactly what a token will be redeemable
for.