Is it too late to get into cryptocurrencies – have I missed the boat?

Get in before the early adoption really starts.
While it might be too late to make 10,000% on the larger coins, it is still very early on and new developments, coins and ideas are being generated almost on a daily basis. We are just at the start. There will no doubt be NEW cryptos that will also have meteoric rises which you can get into. Some haven’t even been invented yet. Anything could happen. Get involved.
Whether you are in the know and can buy in time is another matter altogether, so do your research and get going.
A whole generation is looking at Bitcoin as a store of value. The trust is in the decentralised framework of the blockchain, which makes it so difficult to hack into. Anyone under the age of 30 sees Bitcoin as making total sense.
There are generally four phases of adoption according to Everett M. Rogers (1957)
1. Innovators
2. Early Adopters
3. Late Majority
4. Laggards 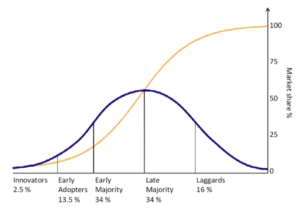 I believe that we are only now approaching the Early Adopter’s stage, so plenty of time to go. At the moment only thousands of people own any Bitcoin or a fraction of a Bitcoin. This is akin to when only hundreds of thousands of people had an iPhone. The real growth came when it started being adopted by everyone and then it grew into the high millions. So get in before the early adoption really starts.
Simon Dixon, CEO and co-founder of BNK to the Future, says that he has seen five waves of cryptocurrencies:
1. The first wave was Bitcoin, which had value because of it being a store of value independent of a central bank.
2. The second was the Altcoins where people were trying to copy Bitcoin. Some of them succeeded, like Litecoin and Dash.
3. Then you had equities in companies, like the exchanges Kraken and Coinbase.
4. Then there was Tokens or ‘ICOs’ as they are called, where companies create an asset class that trades on a secondary market.

How to make money i.e. when to sell them

What is an ICO and how can I profit from it?