Money Through the Ages

Here I have tried to pick out interesting events in the history of money
that help to form a picture of how we got to where we are now.
9,000 BCE: Cattle—Commodity Money
The earliest forms of commodity money were livestock, particularly
cattle, and plant products such as grain. Cattle have been used as
commodity money from c.9,000 BCE. As such, the cow is probably the
most enduring, if not successful, form of money. They are still used today
in some parts of the world. For example, in March 2018, 100 cattle stolen
in Kenya were believed to be used for paying a dowry25.
Would a cow pass the three ‘is it money’ questions that economists like to
use? History tells us that cows are a medium of exchange, so it ticks that
box. You would assume that if it is used for buying and selling things,
people might have some sort of idea of the price of other objects in cows.
If so, that would make a cow a decent unit of account. But is it a store of
value? Hmm, there are some complexities—the price of cows varies by
breed and age and individuals can drop down dead. On the other hand,
cows have a kind of interest rate, in that they are able to reproduce. So,
while any single cow may not be a very good store of value, a herd
arguably is. Monetary economists enjoy arguing about things like this.
3,000 BCE: Banks
Between about 3,000 and 2,000 BCE, banks were created in Babylon,
Mesopotamia, the land now roughly equating to Iraq, Kuwait, and Syria.
Banks evolved from the warehouses that were places for the safekeeping
of commodities such as grain, cattle, and precious metals.
2,200 BCE: Lumps of Silver
Around 2,250-2,150 BCE silver, ingots were standardised and guaranteed
by the state in Cappadocia (in present day Turkey), and this helped their
acceptance as money. Silver was the ‘gold standard’ of precious metal
money. This notes an interesting shift from using commodities that
clearly have an intrinsic value (cattle and grain that you can eat) to
commodities that have an extrinsic value because of their scarcity and
durability. During this shift, you can imagine people then having the
same arguments as we do today with Bitcoin. ‘Yes, but silver doesn’t have
intrinsic value—I can’t feed my family with it’. At the next dinner party if
‘intrinsic value’ is brought up, you can say ‘Come on guys, we’ve been
having this argument since 2,200 BCE…’
1,800 BCE: Regulation!
If you want to blame someone for regulation, blame Hammurabi, sixth
King of Babylon, who reigned between 1792 and 1,750 BCE and
developed the Code of Hammurabi. This set of laws was once considered
the earliest written legislation in human history, and the 282 case laws
include economic provisions (prices, tariffs, trade, and commerce), family
law (marriage and divorce), as well as criminal law (assault, theft), and
civil law (slavery, debt). It included the very first laws for banking
operations. 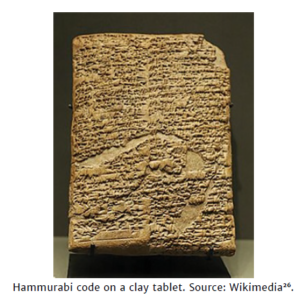 Just think—those libertarians who proclaim that regulation is
unnecessary, but then demand that something must be done when they
lose money in cryptocurrency scams, are just discovering the value of
regulations that have existed ever since laws were first written down!
1,200 BCE: Shell Money
In 1,200 BCE, cowry shells were used as money in China. Cowries are sea
snails, most commonly found on the shores of the Indian Ocean and the
waters of Southeast Asia. Wikipedia describes cowries as:
a group of small to large sea snails, marine gastropod molluscs in the family Cypraeidae, the
cowries. The word cowry is also often used to refer only to the shells of these snails, which
overall are often shaped more or less like an egg, except that they are rather flat on the
underside. 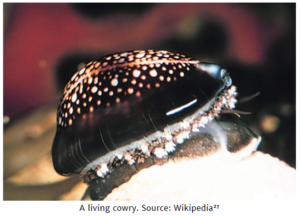 According to the World Register of Marine Species28 (WORMS), the
zoological name for cowries is Monetaria Moneta (Linnaeus, 1758). This
sea snail is so ‘money’ the scientists named it ‘money money!’
In fact, the Chinese named these creatures as ‘money’ well before the
West did—the radical 貝(贝 in simplified Chinese and pronounced bèi),
means shell or currency, and it even looks like one of the cowries. Chinese
words and characters related to money, property, or wealth often use this
radical. 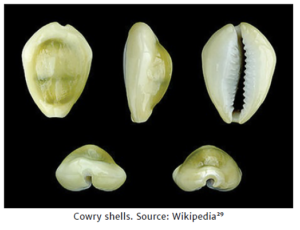 As with cattle, the practice of using cowry shells as money survived until
as recently as the 1950s in parts of Africa.
700-600 BCE: Mixed Metal Coins
In 640-630 BCE, we see the earliest examples of coins in Lydia (now
Turkey), which was a trading hub with large gold supplies. The first coins
were made of a naturally occurring mixture of gold and silver called
electrum. It is no coincidence that one of the earliest popular Bitcoin
wallets, created in 2011 by Thomas Voegtlin, is also called Electrum ! 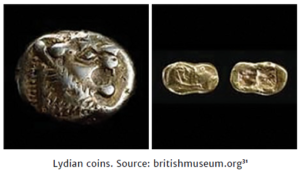 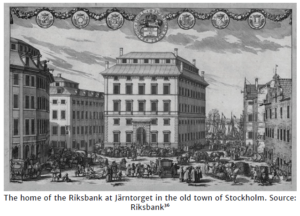 The Riksbank is noted for its attitude towards innovation: in July 2009, it
was the first central bank to charge money from commercial banks to
maintain overnight deposits, rather than paying interest, pushing the
overnight deposit rate down to -0.25% (annualised). It deepened this
interest rate, as well as other associated rates, in 2014 and 2015. This was
an effort to stimulate the economy by encouraging the lending and
spending of money rather than hoarding, when quantitative easing was
not having the desired effect.
1727: Overdrafts!
The Royal Bank of Scotland was founded, introducing an overdraft
facility where certain applicants were able to borrow money up to a
certain limit and were charged interest only on the amount drawn, rather
than on the full amount. This was a form of FinTech.
1800-1860: Cowrie Depreciation
Here is a powerful example of how the supply of money causes price
inflation: When cowrie shells were first introduced to Uganda around
1800, a woman could typically be bought for two shells. Over the next 60
years, as more shells were imported at scale, prices rose, and by 1860 a
woman commanded a price of one thousand shells.
Rai Stones
No history of money would be complete without mentioning the Rai
(sometimes called Fei) stones still in use on the island of Yap. 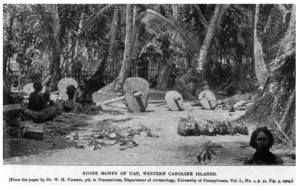 Yap is a small island in the Federated States of Micronesia, approximately
2,000km east of Manila, Philippines. It is known for its superb SCUBA
diving and its Rai stones. Rai stones are large, circular stone discs with
holes in the middle, to help transportation. They are made with stone
quarried from Palau island, about 400 km away, brought back by canoe
with some effort, and still are used as money today.