Where is the value of cryptocurrencies, how are prices determined and what could Bitcoin be worth in the future?

“Bitcoin will go to $500,000 within three years or I will eat my own penis”
– John McAfee, the founder of McAfee software and CEO of MGT Capital Investments and one of the largest Bitcoin mining companies in the world.
5a. Where is the value of Bitcoin and cryptocurrencies?
Some people call Bitcoin and the blockchain ‘Internet 3.0’. We understand why they may see it in this way, however, we have to be clear that Bitcoin is a different technology to the Internet. Bitcoin and Ethereum are what is called a ‘Fat Protocol’.

For the Internet ‘HTTP’ is a protocol that defines how information is sent over the Internet. On the back of these protocols, programmers built application like Facebook and Google. While these protocols created an enormous value, most of the value was captured by the applications that were built on top of the Internet. Meaning that the people who created HTTP didn’t make money and are relatively unknown. However, the owners of Facebook and Google became billionaires and are celebrated entrepreneurs.

With Bitcoin and a platform like Ethereum, it is the actual network itself that is generating the value. Tokenholders are the ones who are going to benefit. The value will be captured by those building and investing at the blockchain protocol layer because of the financial incentives (tokens) that are part of the network’s design.
Participants of the network (users, developers, investors etc) are incentivised to grow the blockchain network because as the network expands the tokens are going to be worth more.

5b. How Are prices determined?
A. The value of cryptocurrencies are dependent on the market, where the prices of various cryptocurrencies vary a lot and it is one of the most fluctuating and volatile markets to date.
B. The price of cryptocurrencies, like any other products, is dependent on demand and supply. If more people demand a particular currency and it is short in supply, then the value increases. More units are mined by miners to balance the flow. However, most currencies limit the supply of their tokens. 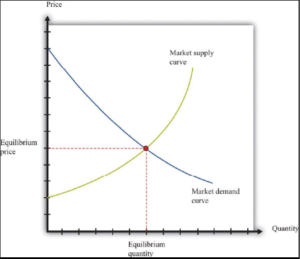 C. Scarcity is an important factor when compared to fiat currencies. Fiat currencies can be printed every day, making our money worth less every year. Digital currencies, however, have limited supply. For instance, the total amount of Bitcoin issued is only 21 million. Therefore, Bitcoin’s supply will decrease in time and will reach its final number by 2140. It also explains why Bitcoin’s value is higher compared to other cryptocurrencies. Dash has the same idea, limiting itself to 18.9 million – this might explain why its price is also doing well.

D. Trust. This one is often overlooked but, like with any currency, tokens will only have value if people have trust in it. Trust comes from a lot of sources such as the credibility of the developers, the kind of service provided etc.

5c. What could the price of Bitcoin be?
Well, this is the 64 million dollar question, isn’t it?
A client of mine and I came up with quasi the same potential possible future valuation = $100,000 per Bitcoin. This is how we calculated it – it’s not very scientific. If Bitcoin really is Liquid Gold and so becomes the new ‘Golden Standard’ as a store of value, then you have to figure out the current value of all the Gold in the world that has been mined.
If that is valued at approximately 8 trillion dollars and if Bitcoin reaches that same level and there are only 21 million Bitcoins ever mined, then that would mean $400,000 per Bitcoin. Important here is the scarcity factor – if that ever changed and more were created, then all bets are off.

A multi-millionaire investor friend of mine once told me a long time ago that if you talk to a start up founder and they say their business is going to make x profits in y time, and it would take z costs to do it, then it will probably be half the amount of profits, take double the amount of time and cost double the amount. I have very much taken this to heart throughout my investing career. Therefore, on a potential valuation of $400,000 I would halve it and halve it again. That’s how I came up with a potential number of $100,000. I told you, not very scientific. It still leaves Bitcoin with a lot of upside. I just don’t know how long it will take. It’s going to take longer than you think.
If you feel this valuation is not big enough, then there are others who believe Bitcoin could go to $1 million valuation per Bitcoin. John McAfee, the founder of McAfee software and CEO of MGT Capital Investments and one of the largest Bitcoin mining companies in the world has publicly bet that Bitcoin will hit $500,000 within three years or he will eat his own penis. That’s a dangerous

thing to say because I think due to its scarcity it will go up but I don’t know WHEN.
There are a few things that could act as a catalyst. China has banned bitcoin before and unbanned it If it were to unban again then prices would explode Also when leverage comes in prices will explode –
Now I hope Bitcoin hits $500,000 within three years for more than one reason…

What are the main cryptocurrencies and what do they do?

How to make money with cryptocurrencies?