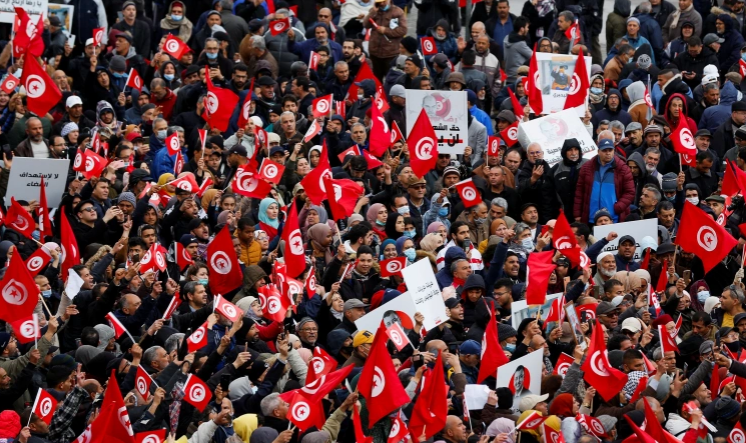 Thousands of Tunisians have taken to the streets of the capital Tunis in the latest of a series of rallies against President Kais Saied, accused by opponents of grabbing power amid a deepening political crisis.

In July last year, President Saied suspended parliament and sacked the prime minister, before further expanding his legislative and executive powers and suspending some parts of the constitution.

The opposition decried the measures, calling them a “coup” and has staged a string of street protests.

Tunisia, long seen as the sole democratic success story of the 2010-2011 Arab uprisings, has since been in turmoil.

On Sunday, several thousand people, including supporters of the Ennahdha movement, marched near the parliament in central Tunis, witnesses said.

Security forces sealed off nearby Bardo Square and entrances leading to it to prevent protesters from gathering there, they added.

Protesters chanted against Saied’s measures and accused him of monopolising power.

Many of the demonstrators were people who had voted for Saied, such as blogger and rights activist Mounira Bouazizi.

Why is Russia invading Ukraine and what does Putin…

“I thought he believed in democracy and the gains of the revolution, but he did the complete opposite,” she told AFP news agency.

Mohammed, a retiree, echoed her, saying: “We cannot call this a democratic process. Today, the people are divided between pro- and anti-Kaid Saied; this harms freedoms and democracy.”

“We will not accept the results of the consultation, this farce against the people,” Samira Chaouachi, the vice president in the frozen parliament, told the crowd.

Saied, a former law professor who took office in 2019, has defended his moves, saying they were in line with the constitution, and promised to safeguard freedoms and rights.

Sunday marked the final day of an online poll launched by Saied in January in a process to help rewrite the country’s constitution, with the results set to be presented to a committee of experts.

So far only 508,000 people, about seven percent of the seven million eligible voters, have taken part, according to official statistics.

A referendum on the constitutional reforms, which Saied hopes will bolster his authority, is scheduled for July, exactly a year after his power grab, with parliamentary elections scheduled for December.

“We are in the midst of a political crisis and we must have a political dialogue to save the country,” she added.

Why is Russia invading Ukraine and what does Putin want?

How To Become A Commercial Real Estate Negotiation Expert?